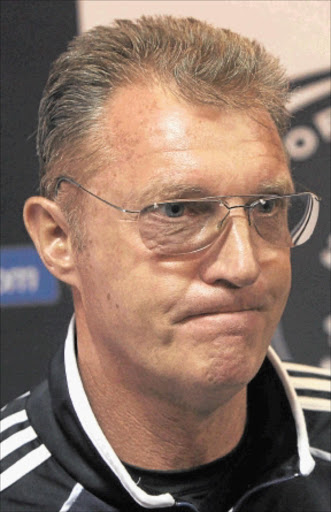 AFTER winning the league in Tunisia with CS Sfaxien on Tuesday night, coach Ruud Krol is keen to come back to South Africa - if the offer is good.

Krol, who guided Sfaxien to their first league title in eight years, is one of the high-profile coaches who are tipped to replace Gavin Hunt at SuperSport United. Others include Platinum Stars' Cavin Johnson and Ernst Middendorp of Maritzburg United.

Speaking to Sowetan from Tunis yesterday, Krol said he had not been approached by United, who lost Hunt to BidVest Wits on Wednesday.

"I have a contract with Sfaxien but would gladly come back to South Africa if I get a good offer. I love South Africa, I also have many wonderful friends there. When I joined Sfaxien in October last year, the agreement was that I can leave at any time if I get a good deal elsewhere. It's simple as that. I heard SuperSport are searching for a coach following the departure of Gavin, but they have not approached me."

On winning the league with Sfaxien, Krol said: "It's a great feeling, it is Sfaxien's first league title in eight years. Everybody is happy and the celebrations are continuing.

"We did well as a team throughout the season and deserved to win. Credit to the players for a job well done.

"We are happy to be going to the African Champions League again," said Krol, who is also likely to end the season with his trademark treble success.

Sfaxien are still challenging for the Tunisian knockout competition and Caf Confederation Cup before completing their season campaign.

In the Confederation Cup, Sfaxien take on Nigeria's Enugu Rangers in Tunisia on Sunday. "I'm used to winning trebles, it will be great to end the season with another treble," said Krol, who achieved a treble with Orlando Pirates in the 2010-2011 season.