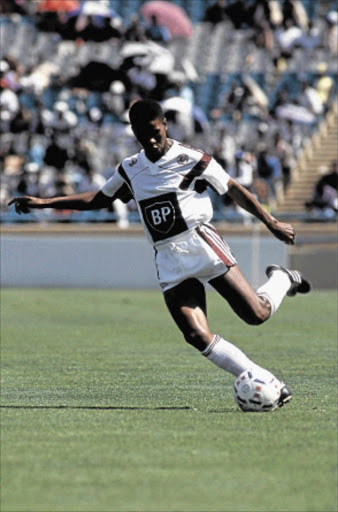 ABEL Shongwe was an unknown player when he came to South Africa to join Kaizer Chiefs in 1980s.

It was his childhood dream when growing up in Mbabane, Swaziland, to one day don the famous black and gold colours of the mighty Amakhosi.

His dream came true on June 24 1986. Shongwe made an instant impression at the Phefeni Glamour Boys, thanks to his great pace and a goalscoring touch.We caught up with him yesterday.

Special. Though my club in Swaziland, Mbabane Highlanders, valued my services, they allowed me to move to Chiefs and I think I represented them with aplomb. I settled very quick at Chiefs as my brother William Shongwe and my compatriot Absalom ' Scara' Thindwa were there. But everybody was helping me a great deal.

I came to Chiefs for trials on a Saturday without their (Highlanders') knowledge and they searched for me without success. They were worried because I disappeared on the eve of a crucial derby against Mbabane Swallows.

I returned on Sunday and though the coach and management were disappointed with me, they allowed me to play. They could not afford not to field me in such a massive game where pride was at stake. I scored as we beat Swallows 3-2.

Can you tell us about the trials at Chiefs?

We played against Orlando Pirates in a friendly in Secunda and I scored in our 3-2 win. Coach Ted Dumitru was very impressed and he signed me immediately. He was following my progress in Swaziland where he was coach of our arch-rivals Mbabane Swallows.

Do you still remember your first goal in Chiefs colours?

It was against Hellenic at Ellis Park Stadium. I came on as a substitute for KKK (Trevor Mthimkhulu) and I finished off a rebound. That goal made me work even harder.

Why did you leave Chiefs?

I asked them to loan me out in 1988 because I was not playing as much as I would have loved. Jeff Butler, who was the coach then, preferred Teenage Dladla and Scara. There was also Shane McGregor, Marks Maponyane and Mike Mangena. Those guys were on top of their game and it was difficult for me to break into the starting line-up.

So where did you go?

To Wits, where I really established myself.

Your next move was Dynamos. Were you frustrated there?

I played in almost all the matches and we won the JPS and it was sad when they closed shop the following year. In 1992 I went to Moroka Swallows but I left a year later because they had financial problems.

So you went for a lucrative offer at Pretoria City (now SuperSport United)?

What was your lowest salary?

It was R9000 at Chiefs but it was enough at that time.

When did you retire?

Around 1999 at (Lamontville) Golden Arrows.

Who were you close to as a player?

Teenage Dladla and Doctor Khumalo and we are still friends. I was also close to the late Patrick "Ace" Ntsoelengoe.

Which opponent caused you sleepless nights?

The late Sam 'Ewe' Khambule. He was a solid fullback.

Who of your children is following in your footsteps?

My son Sandile Michael Shongwe. He is a third-year student at Wits University. He played as a striker for the Wits first team side.

Certainly. They have been consistent throughout the season. They have quality and a wily coach in Stuart Baxter.

You coached Malanti Chiefs in your country and a number of Safa Vodacom League clubs after you retired. Are you still keen to coach again?

I have just completed my CAF B-coaching licence and I am keen to coach in the PSL.