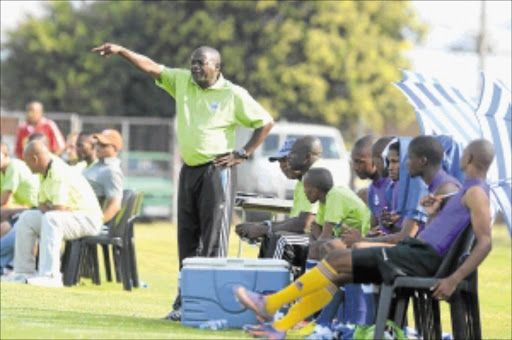 WHEN Dan "Dance" Malesela was in his prime as a player, he led Orlando Pirates to the 1988 BobSave SuperBowl, now known as the Nedbank Cup.

Malesela, now coach of National First Division (NFD) outfit United FC, is hoping to enter the record books by winning this tournament both as a player and coach.

When Pirates lifted the inaugural SuperBowl that year, they defeated arch-rivals Kaizer Chiefs 2-1 in a replay at Ellis Park Stadium.

United FC take on fellow NFD campaigners African Warriors in the quarterfinals of the Nedbank Cup at Moruleng Stadium on Sunday.

United, who are also in the running for promotion to the Premier Soccer League, have defeated two more experienced clubs to reach the last eight.

The North West-based side started their campaign by eliminating Premiership side Chippa United, beating them 3-2, and went on to defeat Jomo Cosmos 1-0.

"It will be great for these boys to go all the way and win it, but we will have to work hard. We know Warriors and will be well prepared for them," Maleselasaid. "For us, the bigger picture is to do well in the league campaign to qualify for the promotional play-offs."

The former Mamelodi Sundowns defender will only start preparing for Warriors today as United had a league game against Vasco Da Gama yesterday.

Warriors will be led by Lynch Pule, who has played for all the South African junior national teams.

Two NFD clubs have previously reached the final of the tournament: Mpumalanga Black Aces and University of Pretoria. Aces were beaten 1-0 by Sundowns in the inaugural Nedbank final in 2008 and two years later, AmaTuks - still playing in the second tier - lost 1-0 to Moroka Swallows.

In 2011, Safa Second Division League side Baroka FC from Limpopo reached the semifinals after brushing aside giants such as Swallows and Chiefs in earlier rounds.