Ndlovu, Mathebula on a do or die duel 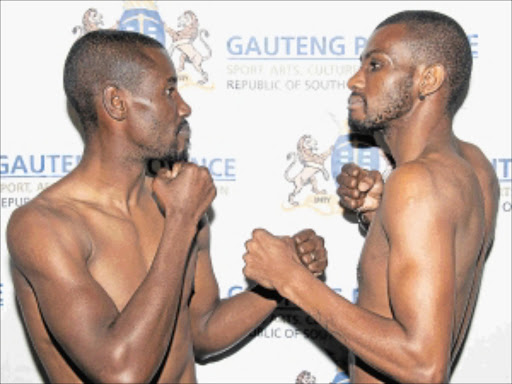 PROMOTER Branco Milenkovic is willing to pay thousands of rands to ensure there will be no fourth meeting between Takalani "The Panther" Ndlovu and Jeffrey "Mongoose" Mathebula in future.

The third fight between the two rivals - the IBF junior featherweight title eliminator on Saturday night - has to be the decider, Milenkovic said at a media briefing in Johannesburg yesterday.

"Their previous fights, the first being the title eliminator in 2010 and the second the actual IBF title 2012, were pretty close. Some people thought Ndlovu was lucky to win the first fight, while others say Mathebula was fortunate to win the title in 2010," said Milenkovic.

"To avoid going through that situation again, we have incentives for the third fight - a R25000 for a clear points win and R50000 for a knockout. I want to make it clear that this is not being done to put pressure on them but to encourage them to fight harder and win smarter."

The Big Top Arena at Carnival City in Brakpan has been chosen as the venue for the African Glory 3 bill on Saturday.

Milenkovic promised Malinga a bonus of R50000 if he beats Gabutan.

They will meet for the third time. Malinga lost the same title to Mokwana on March 26 2011. Mokwana defeated Malinga on points on March 24 last year but was dethroned by Viwe Mdletyeni in July. Mdletyeni forfeited it two months ago after failing a dope test.

Zolani "Last Born" Tete will meet Eduard Penerio, also from the Philippines, in a non-title fight over eight rounds in the bantamweight division, while Shannon Strydom and Gideon Mathe will do battle over four rounds.

These bouts will be televised live on SS4 from 8pm.