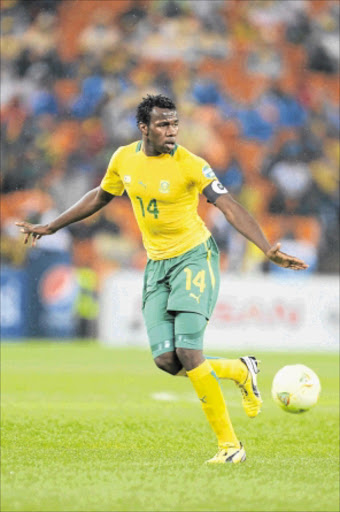 NO GAME TIME: Bafana Bafana skipper Bongani Khumalo in action during the 2013 Africa Cup of Nations match against the Cape Verde Islands at FNB Stadium in Johannesburg. PHOTO: GALLO IMAGES

BAFANA Bafana coach Gordon Igesund's decision to drop his skipper Bongani Khumalo and Thulani Serero for lack of game time at club level looks justified after the pair sat on the bench again for their clubs at the weekend.

Khumalo was an unused substitute for Greek side PAOK as they beat Panathinaikos 2-0 to remain third on the table.

Serero also saw no game time for Ajax Amsterdam in their 3-2 victory at AZ Alkmaar that maintains their one-point lead at the top of the table in Holland.

Feyenoord midfielder Kamohelo Mokotjo has also seen his international career take a dive due to inactivity for his club, and that was the story again this weekend as he failed to make it off the bench.

However, Kagisho Dikgacoi was in action for his English Championship side Crystal Palace as they lost 3-0 at Brighton.

It was a missed opportunity for The Eagles as a victory would have taken them to second position and an automatic promotion place as they seek a return to the Premiership next season.

Striker Dino Ndlovu, who received a recall to the Bafana squad for their 2014 World Cup qualifier against Central African Republic in Cape Town on Saturday, was a second-half substitute for Israeli side Maccabi Haifa.

He failed to get on the scoresheet, but they did win 1-0 to stay second in the title race.

Bafana midfielder May Mahlangu has started the new Swedish season well and helped his Helsingborg side to a 3-1 win over Gefle that has seen them qualify for the last eight of the domestic cup competition.

Left-back Ricardo Nunes played for his Slovakian team Zilina in their 1-0 home loss to MFK Kosice.