Patosi in squad to face Malawi 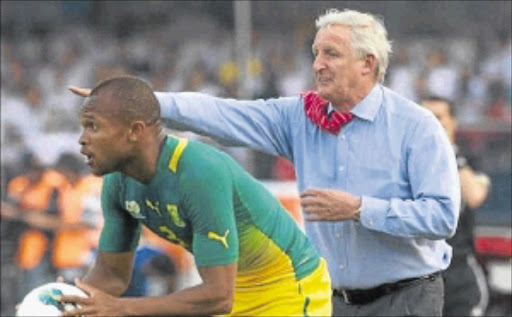 CHANCE TO IMPRESS: Ayanda Patosi will be in the squad to play against Malawi in a friendly match.

GORDON Igesund yesterday called up little-known Belgium-based striker Ayanda Patosi for the friendly against Malawi next weekend, a player that could give Bafana Bafana the precious X-factor for next year's Africa Cup of Nations finals.

Cape Town-born Patosi, who helped Lokeren win the Belgian Cup and qualify for the Uefa Europa League, took the Belgian league by storm this year and was dubbed a "new sensation" by British media.

"I've been watching DVDs of Patosi play and he's done a really good job for his team, Lokeren," Igesund said. "He's scoring goals, he's doing well and he needs to be looked at very closely, and that is why I've called him up.

"I need to spread my wings far and make sure that we are represented by a very strong team that can do the job. You must remember, I'm preparing the team for a tournament and not for the 2018 World Cup. I need to see Patosi in a live situation now and I have a friendly game and a few games between ourselves to do that."

Last month, the 20-year-old drew Europe's attention when he scored a magnificent volley against Standard Liege, finishing off a sumptuous three-pass attacking move where the ball never touched the ground - the video went viral on the Internet. But the youngster has one game and a four-day training camp to surge ahead of Sifiso Myeni, Thuso Phala and May Mahlangu in the right wing pecking order.

Igesund shuffled his plans and picked an additional 12 players who will join the 24 players announced yesterday - the combined 36 players will assemble for camp in Johannesburg on December 27. He will name his final 23-man Afcon squad on December 30, but shut the door on players who were not in the provisional 36.