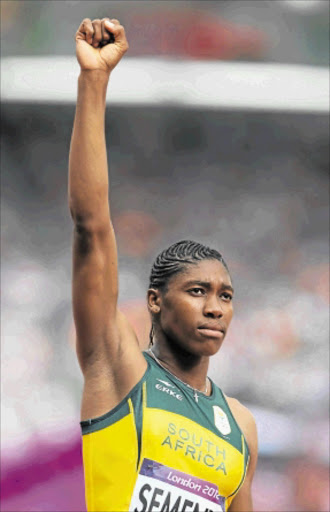 She was last for most of the race and although she sped up towards the end, she could not pass the world champion

Briton Mo Farah added a second Olympic gold to his collection on Saturday, winning the 5,000 meters as a frenzied home crowd cheered.

The Somali-born runner, who last Saturday gave Britain its third athletics medal of the night when he won the 10,000 meters, delighted the public by kissing the ground then doing a few sit-ups. He ran a time of 13 minutes, 41.66 seconds. Dejen Gebremeskel of Ethiopia took silver and Thomas Longosiwa of Kenya collected bronze.

Moments later, Caster Semenya from South Africa managed a silver in her Olympic debut in the 800-metre race three years after being forced to undergo gender tests.

She was last for most of the race and sped up with 250 meters to go, but could not pass world champion Mariya Savinova of Russia, who took gold. Russia also took the bronze with Ekaterina Poistogova.

Savinova finished the race in a season’s-best 1 minute, 56.19 seconds, beating Semenya by 1.04 seconds.

Later, Usain Bolt, already the winner of golds in the 100 and 200 meters at consecutive games — the first person to achieve that at the Olympics — made it a third gold in the 4x100-metre relay with Jamaica.