Caster lines up against big guns at golden spike 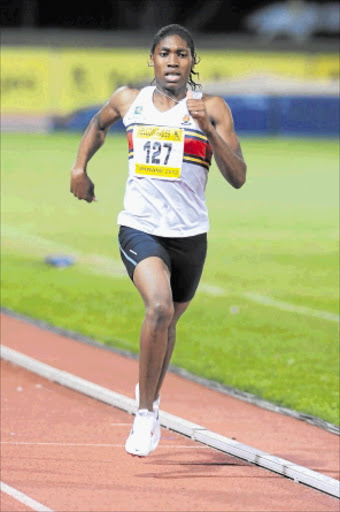 CASTER Semenya will come up against one of her toughest challengers when she lines up in the 800m at the Ostrava Golden Spike meeting today.

The world silver medallist will face Olympic champion Pamela Jelimo of Kenya, who boasts the fastest time this season of 1:56.94, which she posted at the Doha Diamond League meeting two weeks ago.

Also in the field will be Fantu Magiso of Ethiopia, who finished second behind Jelimo in 1:57.90, the second-fastest time of the season.

Semenya has shown slow progress this season but has not yet come up against world-class athletes and a fast race can be expected today.

She dipped below the Olympic qualifying standard of 1:59.90 for the first time this season at the final Yellow Pages meeting in Pretoria last month in a time of 1:59.58.

Other SA athletes also looking for their second qualifying times are Hannes Dreyer, Thuso Mpuang and Tsholofelo Thipe. Distance runner and SA 10km champion Elroy Gelant will be running in the 3000m.

South African javelin record holder Sunette Viljoen will be looking to stamp her authority over the leading women in her specialist event. She has already qualified for the Games at the SA Senior Championships in Port Elizabeth in April with a season's best heave of 61.15m.