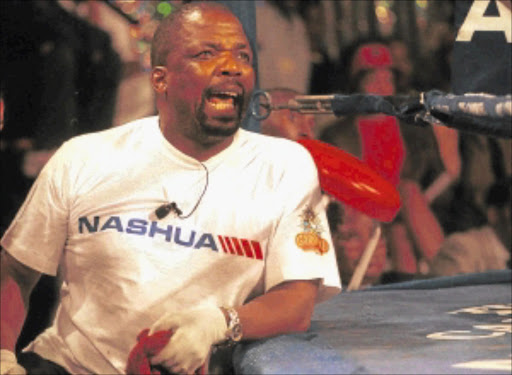 IT LOOKS like prominent Eastern Cape boxing promoter Mzimasi Mnguni might escape punishment for his embarrassing and shameful moment at a tournament he was promoting at East London's Orient Theatre on July 31 last year.

Mnguni stormed into the ring after fight referee Alan Matakane had stopped a South African junior-lightweight title contest between current champion Godfrey Nzimande and Ayanda Yaphi. The latter is promoted by Mnguni's Eyethu Promotions and trains at the Eyethu Boxing Club in Mdantsane.

Mnguni became angry after Matakane had stopped the duel in the eighth round, something which meant that Yaphi's bid to win an SA title had failed. Once he was inside the ring, an angry Mnguni pushed Matakane around, much to the shock of some boxing fans at the venue.

While Mnguni was pushing Matakane, Yaphi's angry fans started throwing plastic and glass bottles into the ring and at ringside. And those at ringside had to use chairs to ward off the missiles thrown by the fans.

As a result of the riot, Matakane was escorted from the Orient Theatre by police and security guards.

Calm was restored only after the intervention of Boxing SA's Eastern Cape manager Phakamile Jacobs, the boxing body's director of operations Loyiso Mtya and Andile Sdinile, a former BSA board member.

Mnguni was charged with bringing the fistic sport into disrepute and was set to appear before a BSA disciplinary committee on August 26. But the hearing was postponed and nothing has been said or done since then. The case against Mnguni was built on reports received from Jacobs, Matakane and Mtya.

BSA board chairman Ngconde Balfour said yesterday that he is yet to receive a report.

Mnguni has already apologised to BSA, his sponsors, the Eastern Cape Gambling and Betting Board and Matakane.