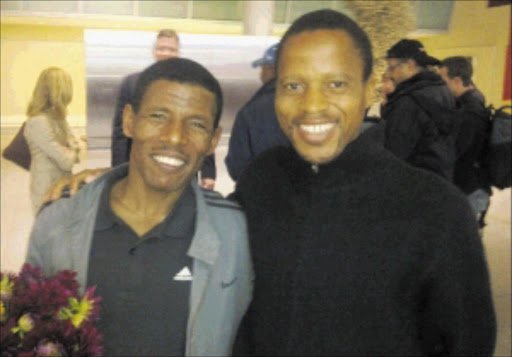 FORMER world marathon record-holder Haile Gebrselassie is eyeing the Tokyo Marathon in Japan in February to qualify for the 2012 London Olympics.

The celebrated global athletics superstar from Ethiopia wants to add an Olympic gold in the marathon to his vast medal collection.

Speaking to Sowetan yesterday, Gebrselassie said he was eager to reclaim his world marathon record after Kenyan Patrick Makau bettered his mark of 2:03:59 by 21 seconds.

The new record was set at the Berlin Marathon in Germany last month, where Gebrselassie bailed out due to a respiratory problem.

Gebrselassie is in the country as a guest of German sportswear company Adidas to do charity work for the Nelson Mandela Foundation.

"It's always great to be in South Africa, this is a wonderful country," he said.

"The best thing for me was handing over the 2010 Fifa World Cup final Jabulani match ball to the Nelson Mandela Foundation.

"South Africa is an amazing country with amazing people. I'm happy that I also had an opportunity to meet my long-time friend Hendrick Ramaala, who is one of the best runners in the world.

"It will be great to come back and train with the guys here in South Africa," said Gebrselassie, who participated in a 5km fun run with 40 lucky South Africans in Johannesburg yesterday.

"I want to qualify for the 2012 London Olympics early in 2012. I'm hoping it will happen in Tokyo. I have too many gold medals but the Olympics one is still missing in my cabinet."

Ramaala, who also took the 40 lucky South Africans through their paces with Gebrselassie, said: "I would like to thank Adidas for bringing The King (Gebrselassie) here. It was really wonderful to see The King running in the streets of Johannesburg. The King wants to come back and train with us."

Gebrselassie scored major competition victories at distances between 1500m and the marathon, moving from outdoor, indoor and cross- country running to road running in the latter part of his career.

He smashed a total of 61 Ethiopian national records ranging from the 800m to the marathon event, setting 27 world records.