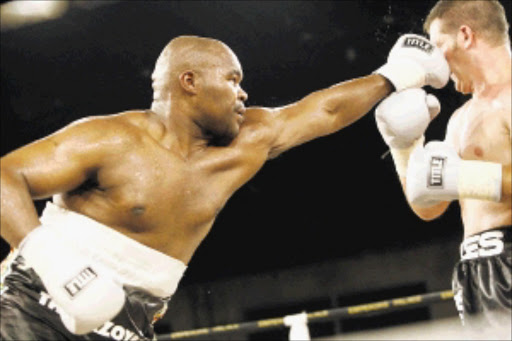 HEAVYWEIGHT sensation and 2009 Boxing South Africa prospect of the year Flo "The Black Panther" Simba will redeem himself against Thamsanqa Dube at Emperors Palace on August 29.

This undertaking was made by Simba's manager Brian Mitchell yesterday.

"Simba will re-establish his confidence and get back to winning ways at the expense of Dube," said Mitchell, whose charge commands a huge following at the imposing Palace of Dreams near the OR Tambo International Airport.

That is where Simba tasted defeat against Francois "The White Buffalo" Botha who stopped him in the sixth round last month. That was Simba's first defeat against 10 wins (9KOs).

Simba will take on the dangerous Dube from Zimbabwe, who stunned the South African boxing fraternity when he stopped tough-as-teak Jake Els in the eighth round for the WBA Pan African heavyweight title at the same venue in April 2009.

But Mitchell, who is wary of Dube's aptitude inside the ring, allayed any fears stemming from Simba's loss to Botha.

"It was a learning curve for Simba," Mitchell said.

Mere mortals should listen when Mitchell talks because he too learned from his first defeat as a fighter against Jacob "Dancing Shoes" Morake on May 1 1982.

Mitchell, who had been undefeated in seven fights going into his fight against Morake, came back a more determined boxer and chalked up 39 wins and two draws, one of which was in a controversial 15-rounder against Tony "Tiger" Lopez.

Mitchell remained undefeated until he retired in 1995. He won the WBA strap, which he defended 12 times before adding the IBF belt.

Simba's eight-rounder with Dube will top the Thunderbolt bill, a five-bout box-and-dine card that will be jointlypromoted by Golden Gloves Promotions and African Ring.

Mitchell revealed that Simba, who is mentored by accomplished trainer Harold Volbrecht, will take on Danie Venter in Golden Gloves's Blockbuster bill that is scheduled for September 24 at the same venue. That shows how much confidence Mitchell, Volbrecht and promoter Rodney Berman have in the 21-year-old boxer.