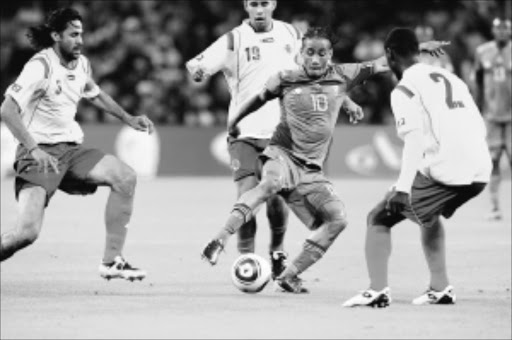 THE South African Football Association says it wants to believe that two of its World Cup warm-up games last year were fair, but will cooperate with any Fifa investigation into whether they were fixed.

Safa condemned "in the strongest terms" allegations of match-fixing in the friendlies against Colombia and Guatemala in May 2010, which were preparation games for Bafana Bafana's hosting of the World Cup.

But South Africa's association also pledged its support to Fifa to "root out the scourge" of fixing.

"As things stand, we want to believe that the matches in question were played in the spirit of fair play and that the outcome of the investigation will reveal efforts put by respective teams," Safa said.

The statement came two days after a Sunday newspaper reported that both South Africa matches were under suspicion as part of a wide-ranging Fifa probe into match-fixing in world football.

The football ruling body won't comment on whether the May 31 2010 match against Guatemala is being investigated. South Africa won 5-0 in a game that included three penalties for handball.

However, Fifa said it is probing a friendly this month between Nigeria and Argentina, where Nigeria recorded a surprise 4-1 win in a match with two penalties and that showed suspicious betting patterns.

Safa said it had no knowledge of any Fifa investigation into last year's friendlies, but promised stern action against any of its officials if they were involved in fixing.

"While no official notice has been communicated to us by Fifa, Safa is strongly against any form of bribery, unfair play and dishonesty," the association said on Tuesday. "We would like to take this opportunity to assure Fifa of our unqualified cooperation and support should they institute any form of investigation. Should any of our administrative members be found to have played any role in the matter... the association will take appropriate action against the culprits in order to protect its integrity and for the good of the game." Both the South Africa-Guatemala and Nigeria-Argentina matches were handled by the same referee, Ibrahim Chaibou of Niger.

South Africa's friendly against Colombia - which was played four days before the Guatemala match - was the first game at Johannesburg's newly finished Soccer City stadium, the venue for the World Cup final. The hosts won 2-1 with all the goals coming from penalties. One of them was also ordered to be retaken.

One of the penalties in the South Africa-Guatemala match was awarded after the ball hit a player well outside the penalty area. No players have been accused of wrongdoing.

Chaibou was also the referee when Bahrain beat a fake Togo team 3-0 in an infamous international last September. That match appeared to confirm growing fears that international matches were being targeted for betting coups by organised crime gangs.

Fifa is engaged in what it calls a "large-scale investigation" into manipulation of matches for betting syndicates.

The Zimbabwe Football Association said a Fifa anti-corruption unit, led by the body's head of security, Chris Eaton, was expected in the country this week to help wrap up a match-fixing investigation there involving national players.