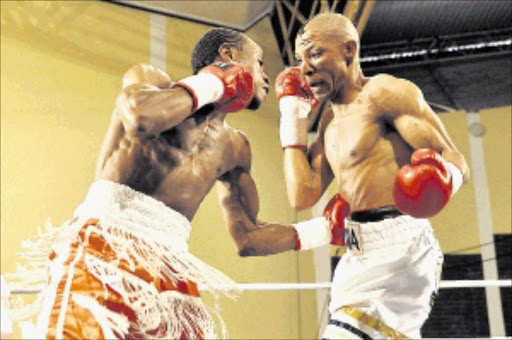 The South African Institute for Drug-Free Sport took samples shortly after Molefe's stunning second-round knockout of Simphiwe Tom for the South African featherweight title at Orient Theatre in East London on May 29.

Boxing South Africa was informed about the findings on Wednesday.

Though BSA chairperson Peter Ngatane would not reveal the name of the boxer concerned, he confirmed that a boxer from Duncan Village, who is based in Carletonville and trained in Gauteng by Nick Durandt, was notified about the positive result.

"I can't reveal the name of the affected boxer until after he has exercised his rights to go for a B-sample test if he is not happy about the first test. We'll take it from there but the final decision will be taken by the South African Institute for Drug-Free Sport," said Ngatane, a medical doctor by profession.

Durandt yesterday confirmed that one of his charges tested positive for a banned substance after undergoing a post-fight urine test.

"There has been contact form the (Institute for) Drug-Free Sport. Normal procedures are to be followed such as hearings," he said.

Molefe, who is trained by Durandt, confirmed being contacted by the institute.

"That's all I'm prepared to say to you now," said the 27-year-old fighter who left boxing fans gazing in disbelief when he poleaxed Tom with a trip-hammer of a right hand to win the vacant South African featherweight title.

Matima survived a first-round scare after taking pounding from Tom.

He came back very strong in the second round and floored Tom, who hit the canvas head-first.

Tom, who outpointed Molefe over four rounds in their first fight in 2007, tried to get up but his legs wobbled like those of a newborn calf.

Referee Siya Vabaza counted him out.