Semenya is back at her best 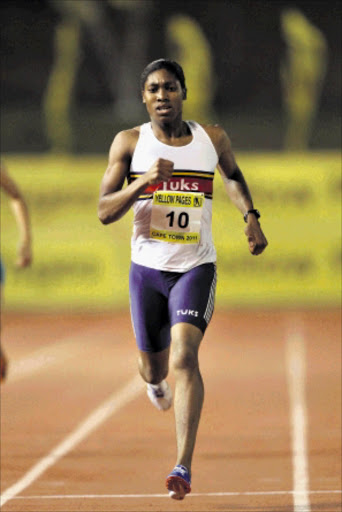 CASTER Semenya was forthright and intimidating in her rare post-meet interview last night: "I will conquer the world again!"

Semenya, who rarely speaks to the media after the ordeal she went through after the 2009 IAAF World Championships in Berlin, said: "I know what I can do on the track, and I never doubt my ability as an athlete."

Last night, Semenya did not only speak to the media - albeit for just a minute - she also competed for the first time in the 400m event that she literally won without breaking sweat.

This was part of the third and final leg of the Yellow Pages Series which now goes into inter- provincial level, starting in Germiston on March 26.

As expected, Semenya was well received by fans, who went berserk when the Limpopo athlete won the event in 54:03 ahead of Namibian Tjipekapora Herunga and Alet van Wyk. Herunga finished second on 54:40 and Van Wyk third on 55:11.

Asked how she felt about competing in the faster event after recovering from a back problem, Semenya said: "I took it easy today as this is part of my technique with my coaches after my back problem. It is really good to start the new race with a win. I'm also happy with my time."

She is expected to return to her specialist 800m at the national championships, and will also return to Europe to prepare for the World Championships in Daegu, South Korea, in August.

It was good that her coach Michael "Sponge" Seeme did not accompany her because it was unlikely that she would have agreed to be interviewed.

Seeme has been speaking on Semenya's behalf since she started competing after the much-vaunted gender debacle.

Meanwhile, also Stephen Mokoka proved that he is simply the best. The Transnet athlete once again shone when he won the 5000m.

Zintle Xiniwe was another female athlete who gave a good account of herself when she won the 5000m in 15:53:53, in the process beating the revered Phalula twins - Lebo and Lebogang.