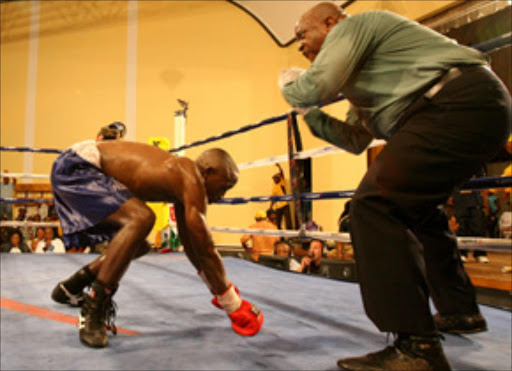 He lost the SA junior-bantamweight title to Unathi Gqokoma on Sunday and has been on crutches since.

Joyi told the Dispatch that x-rays taken at Cecilia Makiwane Hospital in Mdantsane did not show what caused his whole left side to go lame.

His trainer, Boyboy Mpulampula, and promoter Siphatho Handi, on seeing the fighter struggling to walk and speak, took him to a traditional healer for help.

The traditional healer suggested that muti could have been used against Joyi.

The suggestion has been vehemently denied in the Gqokoma camp, with promoter Mzimasi Mnguni and cornerman Sihle Mnguni both slamming the allegations.

Joyi said yesterday: “The left side of my body is numb, though x-rays have not picked up anything wrong . But two traditional healers told me it’s because muti was used during the fight.

“Another traditional healer told me I was lucky to survive until round 10. He says he watched the fight and could see that something was used against me. It was difficult for me to even open my eyes.

“I received a call from a private number and the person on the other end of the phone asked me to forgive him for what happened during the fight. I was shocked. I didn’ t recognise the voice. The caller told me to take child’s urine and rub it in from my waist down if I wanted to be okay.”

Handi added: “We don’t really know what happened except that it all started inside the ring. Themba struggled to walk out of the ring and things became worse in the dressing-room.”

Mpulampula, who honed Joyi’s skills before the fight, is concerned about his charge . “I’m concerned because the traditional healers have told us muti was used. It was difficult for Themba to speak earlier this week because of what happened during the fight,” he said.

Gqokoma was taken aback when the Dispatch contacted him about the allegations. “What? I know nothing about this because I don’t use muti. I used my boxing skills when I won the fight. I was fitter than him and everybody who saw the fight will agree with me.”

Promoter Mnguni said any inference they were implicated in muti use was “defamatory”.

“Do people still think in that way? I think what’s being said amounts to defamation of character. This implies that fair play was not applied during the fight and it’s really bad coming from a prominent stable that has been winning titles.

“Nobody has ever said they used muti when they were winning. My own understanding is that whoever wins during a fight, wins clean. I believe that muti will never win a boxer a fight. Basically, what this all means is that Unathi’s victory is not appreciated and this can destroy my fighter.”

Sihle Mnguni echoed these sentiments. “I don’t want to entertain this because I don’t believe in such things. Anyone who brings superstitions into the game is counter-productive and spoils the sport,” he said.

According to Boxing South Africa board chairman Dr Peter Ngatane, “there is no way that a boxer, any boxer can be taken to a traditional healer after he had suffered injuries in a boxing fight”.

“The first point of contact is always the medical doctor or nearest hospital.

“I don’t understand the logic of consulting the traditional healers, this is about the life of the boxer,” said Ngatane . Seeking a traditional healer’s opinion or traditional medicine after a boxer has suffered severe injuries is not recommended, he added. “It complicates things. The boxer should be taken in for scans and be examined by professional doctors.”

Ngatane promised to check with the medical team that was present at the fight about Joyi’s situation to see if he could get a better understanding of the boxer’ s condition.