Soccer grannies off to the US 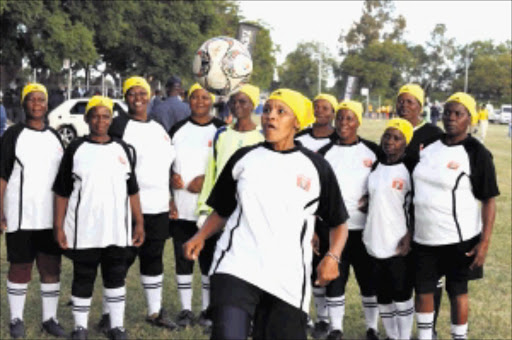 VAKHEGULA Vakhegula, Limpopo's soccer-playing grannies, jetted off to the US on Tuesday night to compete in the Veterans Cup.

But not all of them undertook the dream trip, because of a lack of funds.

Nineteen of the grannies made the trip but seven were left behind.

The tournament in the US kicks off today and ends on Sunday, and the grannies will return next week.

Vakhegula were left in limbo when the trip was delayed for a week because there was not enough money to organise visas.

Vakhegula's founder and owner, Beka Ntsanwisi, said they were happy that the grannies will be able to display their talent in the US.

"I'm very excited that they left. It is unfortunate, though, that not all of them made the trip. But we explained to those affected and they understood the situation. We did not have enough money and we relied heavily on the funds from American Herbal Life. There were promises from South Africans but most of them did not give us any money," Ntsanwisi said.

She said the affected players will be considered for the trip to China later this year.

Vakhegula received donations after Sowetan highlighted their plight early this year. Our stories about the grannies also attracted journalists from France, Germany and China to cover their practice matches in NkowaNkowa, outside Tzaneen, where the grannies are based. A documentary is being made about these skilful players, who range in age from 50 to 80.