Khumalo proves that bricklaying is no longer a man’s job 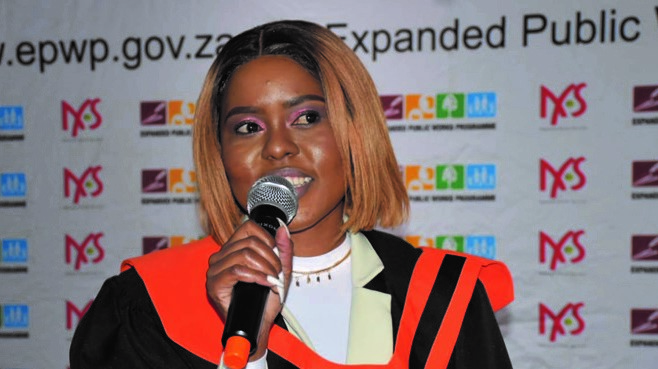 Pretty Khumalo a proud bricklayer thanks to EPWP.
Image: Supplied.

The future looks bright for Pretty Khumalo (29) from Mpumalanga, who recently qualified as a bricklayer.

Khumalo saw an advert on social media and grabbed the opportunity to make her dream of becoming a qualified bricklayer come true.

She started a learnership as part of the Artisan Development Programme, which covers trades including electrical, bricklaying and plumbing.

The programme is part of the Department of Public Works and Infrastructure’s Expanded Public Works Programme (EPWP).

Armed with her bricklaying certificate, Khumalo says that South Africa needs more women artisans and is determined to make her mark in the male-dominated bricklaying industry.

“Bricklaying is not only about laying bricks, one can also work as an inspector and do other things,” she said.

“I have always believed in myself, that I can do anything that men do.

I believe women are capable of doing what men do; they should start dominating the men’s world,” says Khumalo.

“What men can do, women can do too; they can do it far much better than men. Women need to believe in themselves and have confidence.”

Khumalo, who lives in Pretoria, plans to start her own construction company.

She was among the 37 graduates who completed their three-year training. During the training, the participants received a monthly stipend of R3 000.

The EPWP, through the National Youth Service (NYS) office, recruited participants who showed an interest in the programme during the first phase of their NYS training.

These participants were upgraded and placed in the Artisan Development Programme, which is fully funded by the NYS.

Public Works and Infrastructure Deputy Minister Noxolo Kiviet, who officiated the graduation ceremony, expressed her pride and encouraged the young graduates to look for employment in the formal sector.

“I am strongly convinced that you will live up to your calling as artisans in various fields of the built environment to the very best of your abilities,” said Kiviet.

She said the Artisan Development Programme is a key government initiative aimed at affording the youth better employment prospects.

“It is important to note that the EPWP plays a critical role in the workforce and in the provision of scarce and critical skills in South Africa,” the deputy minister said.

The expanded public works programme (EPWP), which created over 1m work opportunities in the past financial year, continues to uplift the youth, the ...
SebenzaLIVE
2 weeks ago

The Special Investigating Unit (SIU) has partnered with the SA Institute of Chartered Accountants (Saica) and the North West University (NWU) to ...
SebenzaLIVE
2 weeks ago

Every year, thousands of people travel to the Greater Kruger National Park to experience South Africa’s natural wonders.
SebenzaLIVE
2 weeks ago
Next Article