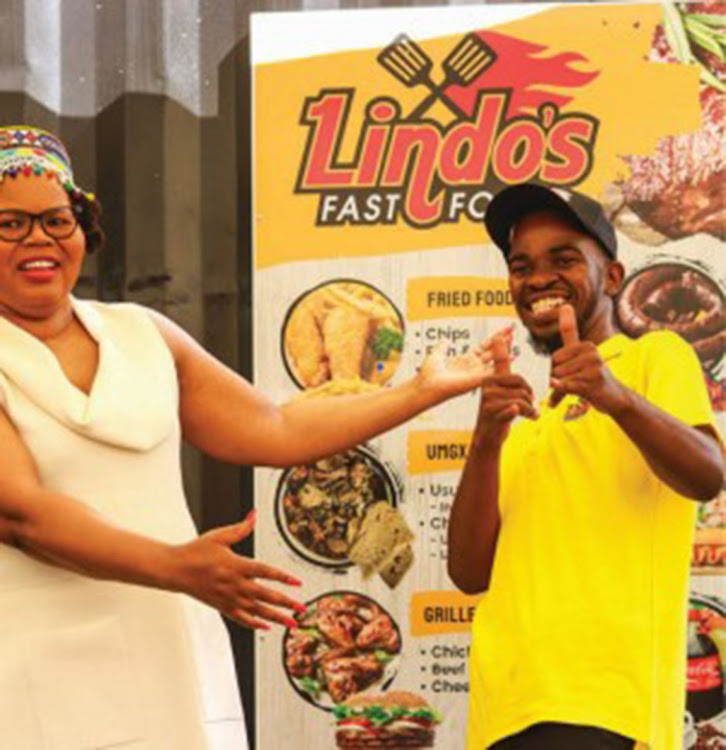 The National Empowerment Fund (NEF), in partnership with the Solidarity Fund, has thrown a young entrepreneur a lifeline.

The fund CEO, Philisiwe Mthethwa, says Lindokuhle Msomi received a R400,000 mobile kitchen after his make-shift kiosk was destroyed in the July 2021 unrest.

Msomi, 29, caught the nation’s attention when he used nine months’ worth of savings from his R350 social relief grant to start a roadside fast food outlet in KwaMashu, Durban, in February 2021.

Months later, however, his structure – made from recycled wood – his stock and his appliances, were looted during the unrest that ripped through KwaZulu-Natal and Gauteng.

In May, the smile was put back on his face when he took delivery of a custom-built kitchen, valued at R400,000, through a grant set up by the NEF and Solidarity Fund to support businesses affected by last year’s civil unrest.

Msomi says losing his job as a freelance videographer and photographer when the country went into a hard lockdown in 2020 triggered his entrepreneurial skills. He found the material needed to build a structure for a fast food kiosk, borrowed a stove and deep fryer and used his savings to buy stock.

Msomi inspired the nation with his determination when his story was shared on TV. As a result, the NEF – which provides financial and non-financial support to black-owned and managed businesses – approved funding to help the entrepreneur.

In May, after helping him register with the SA Revenue Service (Sars) and Companies and Intellectual Property Commission, get community approval, municipal permits and access to water and electricity, Msomi received his new kitchen. He also received cooking equipment, stock and training to run his business.

Called Lindo’s Kitchen, the menu has been extended to include burgers, rotis, hot dogs, grilled meat, chips and cooked meals.

“Our client base has increased, which created job opportunities and I have employed four people,” says Msomi.

Mthethwa says as a "funder with a soul", the NEF strives to make a difference every day to the economically marginalised.

Mthethwa says applicants’ companies, closed corporations or cooperatives have to be registered and in good standing with Sars. They must also be able to prove that they were negatively impacted by the unrest in KwaZulu-Natal or Gauteng and show that jobs lost would be restored or increased within 12 months of receiving funding.

Catering business is thriving on multiple streams of income

When Hlalefang Mzingwane was growing up, she watched her mother prepare delicious meals for her family.
SebenzaLIVE
3 months ago

Pumla Gobelo, 38, from Dutywa in the Eastern Cape has become an entrepreneur, thanks to the assistance she received from government through the child ...
SebenzaLIVE
5 months ago

How do you keep a business going when the challenges seem insurmountable.
SebenzaLIVE
9 months ago

Golden flames billow atop the stove. The cast iron pan heats up and the fragrance of frying onions fills the room.
SebenzaLIVE
9 months ago
Next Article