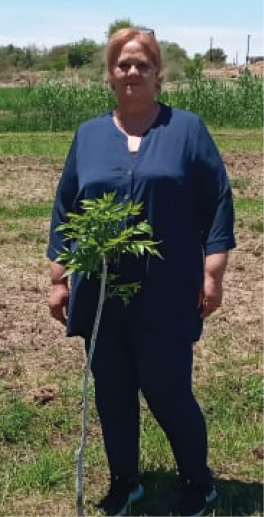 Elize Beukes is a raisins farmer who's exporting her goods to the United Kingdom.
Image: Supplied.

Elize Beukes (63) is a Northern Cape farmer with global reach.

She farms grapes which are turned into raisins.

Beukes exports her raisins to the United Kingdom.

Situated in Eksteenskuil just outside of Upington in the Northern Cape, Beukes has an eight-hectare farm. Two hectares are dedicated to growing grapes.

In January she harvested 93% and 73% of the expected yield from her choice-grade raisin grapes and golden raisin grapes, respectively.

The raisins are exported thanks to an offtake agreement she has with processing company Red Sun-Dried Fruit and Nuts.

Wine grapes and lucerne are also produced, says Beukes, who is grateful for the donation of lucerne seedlings from the Northern Cape Department of Agriculture, Environmental Affairs, Rural Development and Land Reform.

According to the department, raisin grapes’ peak season provides employment for 30 000 to 35 000 seasonal workers.

“South Africa earns foreign currency from these farmers as 90% of all produce is exported.

He says the global trend towards healthier eating provides an opportunity to grow the industry even more. “Raisins are versatile and can be used in a wide variety of food products, such as a natural sweeteners,” he adds.

Farmers may call the Northern Cape Department of Agriculture, Environmental Affairs, Rural Development and Land Reform at 087 630 0387 to see if they qualify for support.

Khodani Maano realised from an early age that he had a passion for farming. He persuaded his parents to send him to a Technical and Vocational ...
SebenzaLIVE
5 months ago

Here's how to become a poultry farmer

If you are interested in starting a poultry farm, you can approach the South African Poultry Association (SAPA) for assistance.
SebenzaLIVE
5 months ago
Next Article