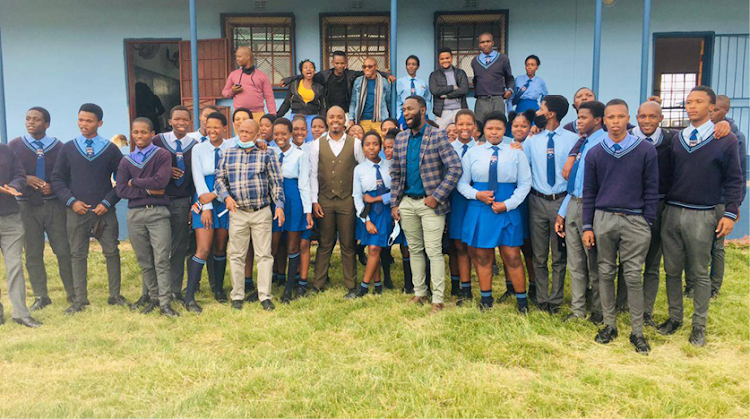 The Principal of Ngqwala Senior Secondary School, Abonga Mdze (in the blue shirt and striped blazer), pictured with the 2021 matrics.
Image: Supplied.

One of the country’s youngest school principals shows that with dedication and passion, Maths and Science can be mastered.

Mdze became acting principal of the school, which is in Tsolo village in the Eastern Cape, in June 2020 and under his guidance, a 66% matric pass rate was achieved that year.

As a result, his appointment became permanent in January 2021, when he was just 28.

Mdze, who has a Bachelor of Education from the Walter Sisulu University, says that his path into teaching started when he was a learner at the Lutuka Senior Secondary School, and tutored his peers in mathematics.

“By the time I got to matric, word of my tutoring had spread so much that on Saturdays and Sundays, pupils from schools in the surrounding villages would come for lessons,” says Mdze.

He started his official teaching career as a mathematics teacher at the KT Mchasa Senior Secondary School in Tsolo in 2015. While there, he started winter classes that saw the school’s maths result improve.

His teaching excellence was noted by his peers and in 2017, Mdze formed part of the Eastern Cape Department of Education’s winter school programme in the OR Tambo Inland Circuit.

“The winter classes I started in 2015 at KT Mchasa Senior Secondary School produced such good results that the department rolled out a similar project throughout the circuit.”

In June 2019, he became the Head of Department for Maths and Science at Ngqwala school. The year before, none of the school's matriculants passed maths or science, but under his guidance, the Class of 2019 achieved a 35% pass for maths and 40% for science.

“We managed to achieve this because when I was appointed, I involved all the teachers under my supervision. I also engaged with pupils and parents.”

Having sold his vision, Mdze launched the Ilima programme. Ilima is the isiXhosa word for the ‘community coming together with a singular mission’.

Here's how to receive funding from Sefa

Small, micro and medium enterprises (SMMEs) in various sectors are flourishing, thanks to the assistance they receive from the Small Enterprise ...
SebenzaLIVE
2 months ago
Next Article