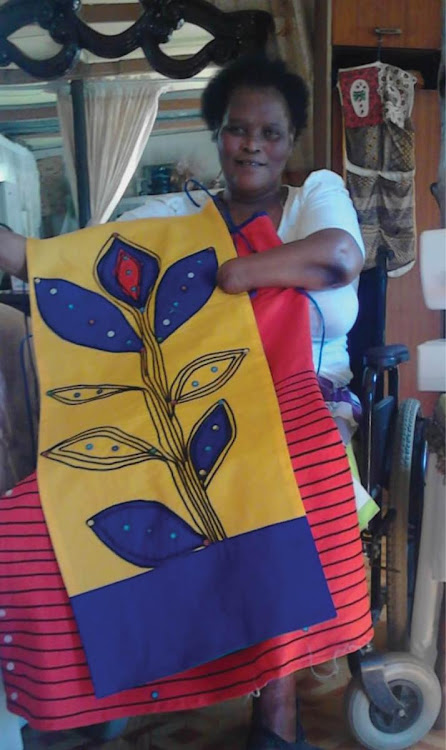 A master seamstress is making top-quality clothing, despite having no hands and only one leg.

Bolekwa Salusalu (67) is part of the four-member OoMama Zintsika 1955 Sewing Primary Cooperative based in Mdantsane near East London in the Eastern Cape.Salusalu says she relies on a lifetime of experience to do the job.

In 2009, she was diagnosed with gangrene, which develops when the supply of blood to an area of the body is interrupted. She had to undergo multiple surgeries between 2010 and 2013, and doctors were unable to save her hands and one of her legs.

“After losing both my hands, doctors gave me a rubber prosthetic [artificial body part]. I found the rubber useful in my work, even though it was not meant for that purpose,” she says.

The seamstress says using her artificial hand, she draws the patterns she wants. She gets help to cut the pieces of material and then sews them herself, using a foot-operated sewing machine.Salusalu, who is the founder of the cooperative, makes school uniforms, traditional clothing and Madiba shirts, among other things.

She also trains and mentors women in the community who are interested in sewing. Before starting the cooperative, Salusalu ran a sewing training academy at the Buffalo City Metro’s Mdantsane community service centre.

“The municipality provided me with machines, which I used to train women, the majority of whom were young people. Through that training programme, I was able to produce seamstresses who went on to work for big clothing manufacturers,” Salusalu says.

She started sewing when she was 15, after learning from her grandmother. The experience she accumulated over the years is what has enabled her to keep working, even after the amputations.“I did not want to feel and be treated as if I am not able to do anything. I set about doing what I knew best, and I have never looked back,” says Salusalu.

The Buffalo City Municipality, through its Special Programmes Unit assists people with disabilities to access funds and tools that will help them with their daily lives. For more details send an email to shaunpe@buffalocity.gov.za or call 043 705 1015.

Tshwane South Technical and Vocational Education and Training (TVET) College at Pretoria West Campus is the first in South Africa to have five ...
SebenzaLIVE
2 months ago

Cake is a symbol of honour across cultures and occasions, and used to commemorate life’s most important milestones.
SebenzaLIVE
2 months ago