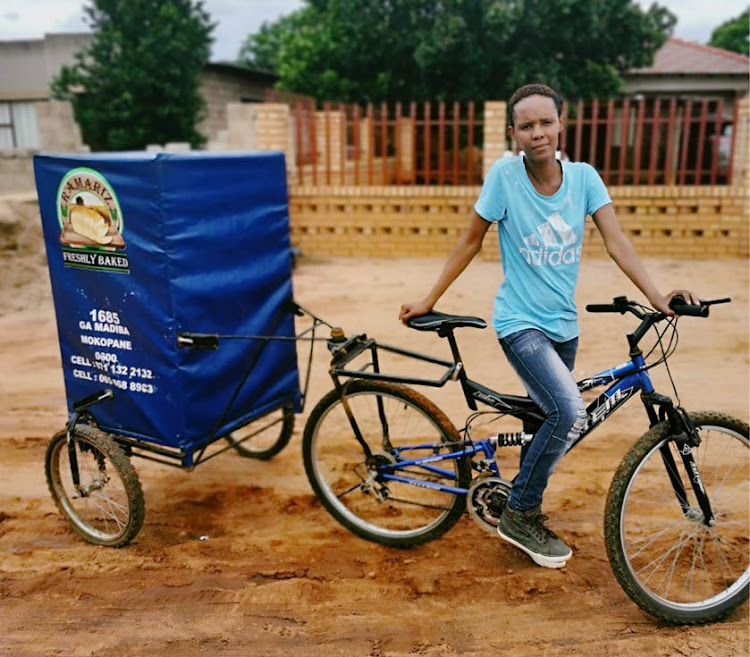 Ramasela Matsemela is creating jobs in her community through her bakery, which also delivers the bread.
Image: Supplied.

From selling loaves of bread, transported by wheelbarrow, to owning five delivery tricycles and employing 13 people, Ramasela Matsemela (34) is hungry for success.

Matsemela, from Ga-Madiba in Mokopane, Limpopo, owns Ramariz Bakery, which sells bread to the community, spaza shops and those selling kotas, and also delivers door-to-door.

Initially, Matsemela didn’t know how to bake, but knew that getting a job at a bakery would help her gain the skills.

She was not happy at the bakery, as she didn’t learn the skills she needed, so she quit and hired a professional baker to teach her at her home.

She started her business in 2019, after retiring from soccer.

“I was eager to create employment… I’ve always wanted to help people, especially with jobs,” she says.

When she started baking, Matsemela had to find a way to deliver her bread. This gave her the advantage over her competition, who only sold from their shops. She decided to use a wheelbarrow and later a bicycle.

“Our toughest challenge was when we had to push trolleys or ride bicycles in the rain. However, rainy days were our most successful days because people did not want to go out,” she says.

Matsemela prides herself on putting in extra hours when everyone else has gone home, and on her multi-skilled approach of baking, marketing and selling.

As for the future, she aims to own a building to house her bakery, employ more people and do a baking course.

“I want to see my bakery selling countrywide. I have pushed to get a building because we work at home in a garage that is now too small.”

Matsemela says her business has grown significantly and needs more space and a bigger oven.

Lack of representation sees the birth of Nandikwa Doll brand

Not being able to find a doll that represented her daughter’s heritage and culture inspired Meyerton entrepreneur Mmule Ramothibe Ka Pityana to ...
SebenzaLIVE
1 month ago

Given Ngwamba, 35, from Naas in Mpumalanga, did not think he would struggle to find employment after completing his sound engineering diploma at the ...
SebenzaLIVE
1 month ago
Next Article