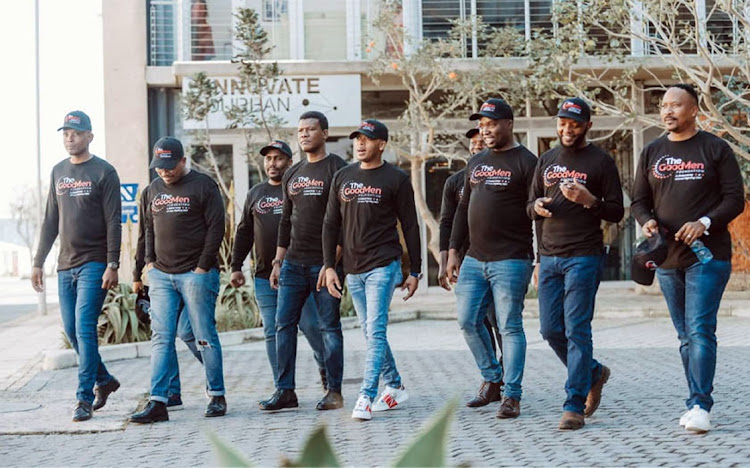 Members of the GoodMen Foundation, who have taken up the fight against GBVF.
Image: Vukuzenzele

A group of concerned men has come together and established an organisation to contribute to the fight against gender-based violence and femicide (GVBF).

The founder, Smangaye Xaba, says the GoodMen Foundation (GMF) encourages men, from all communities across SA, to actively participate in creating social change to heal and build communities.

The group does not only want to condemn violence after an incident, it has also formulated various programmes to curb GBVF, including community-based dialogues that inform and empower community leaders to become active GBVF champions.

“Local councillors, religious leaders, school principals and business leaders are empowered to coordinate dialogues in their respective spaces of influence, working with the GoodMen Foundation.

"These robust dialogues are not only for men, but also women and youth,” Xaba says.

The foundation has also taken its initiatives to institutions of higher learning.

The Tertiary GBV Alleviation Programme aims to create a safe environment for staff and students to report sexual offences, provide trauma counselling for victims and ensure justice is served.

Through its events, the organisation is also running a pledge campaign to get one million men to sign a pledge against GBVF.

“We want to inspire one million conversations and one million actions against GBVF in five years. Men are being mobilised to participate in the International Men’s Walk for Change, a march through communities, especially hotspots,” he says.

A member of the foundation, Soweto Mandlanzi, says his contribution is to mentor young men who need guidance and father figures.

"Men from all walks of life have to rise up in their communities and show leadership in social ills. We know part of the problem is the vicious cycle of a lack of guidance as young men grow up, and the neglect of boys in some families. I believe it is useless if I do not speak out, do something right and protect women,” he says.

– This article was first published in GCIS-Vukuzenzele

In an effort to combat the scourge of gender-based violence (GBV), the Good Men Movement (GMM) will hold its annual conference next week where young ...
News
3 weeks ago

This is a punchline in SA short film We Are Dying Here, which won two international awards at the Female Film Festival in Berlin, Germany, on Monday ...
Entertainment
1 month ago

Put men at the centre of mental health matters

The World Federation for Mental Health (WFMH) promulgated this day in 1997 to raise the international community’s awareness of mental health in an ...
Opinion
1 month ago
Next Article