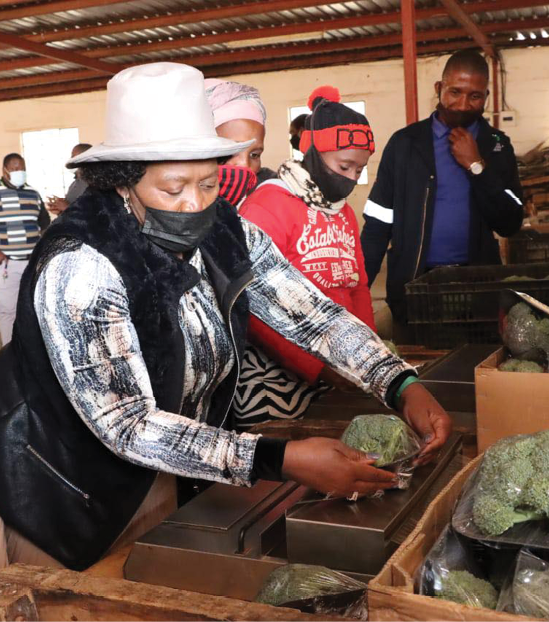 The KZN MEC of Agriculture and Rural Development, Bongiwe Sithole-Moloi, recently visited the Mooi River farm and commended the female farmers, who are excelling despite the Coronavirus pandemic.

Gugulethu Farm is one of 896 farms, measuring 700 000 hectares of state land, that was underutilised or vacant. The land was claimed under government’s Land Reform Programme.

Gugulethu Community Trust spokesperson Sebenzile Dladla says families living on the farm asked seven women to form a committee and apply to the provincial government to use the land that was once a fully functional farm.

“We got the approval in 2008. As we were clueless about the management of a farm, even though we could work, we leased it out to commercial farmers with the hope that they would mentor us,” she says.

When the lease expired, the commercial farmers didn’t renew it and the women decided to work the land themselves.

At the time, they didn’t have working machinery. In 2018, they received funding from Potatoes SA and started farming potatoes on 18 hectares, using only their hands and domestic gardening tools.

In 2019, they received R3 million in funding from the KZN Department of Agriculture and Rural Development and have since expanded production to include broccoli, cauliflower, cabbage and spinach. They now use 70 hectares of the 345-hectare farm.

“We used part of the funding to fix machinery and facilities, including underground water pipes, the cold room and the centre-pivot for irrigation,” says Dladla.

The farm, which permanently employs 28 women, 14 men and some seasonal workers, supplies its produce to the Durban and Mkondeni fresh produce to markets, local supermarkets, Spar and Saverite Supermarket.

“We are happy to see people from our community and neighbouring areas coming to get jobs and being able to provide for their families, as most of the men in area left to find work,” says Dladla.

For funding and training opportunities, go to www.kzndard.gov.za

Vhutshilo Netshiongolwe has created an organic, plant-based cereal that is suitable for diabetics.
SebenzaLIVE
3 weeks ago

Kwadi (29), from Brits, in North West, is a livestock farmer and recently ventured into vegetable farming and horticulture.
SebenzaLIVE
3 weeks ago

Inequality in South Africa has sowed division among the population.
SebenzaLIVE
4 weeks ago
Next Article