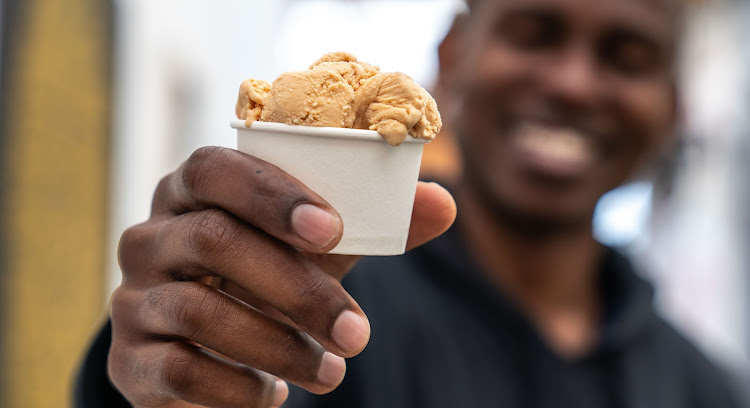 Growing up in Zimbabwe, Tapiwa Guzha ate the fruit and vegetables from his grandmother’s abundant garden.

He was surrounded by indigenous produce such as baobab, fennel, monkey orange, and masawu fruit. But at school, other kids mocked his food.

As the years went by, Guzha realised the weight of colonialism on the African continent as people shied away from local cuisine. He decided to celebrate and elevate his heritage through food.

It needed to be inviting, appealing, and universal – and so he developed artisanal vegan ice cream.

With his PhD in Molecular Biology, Guzha was inspired to experiment with dry ice to create the frozen treat. He later founded Tapi Tapi, an ice cream bistro in Observatory in Cape Town.

No day here is quite the same as the ice cream menu is changed regularly, but one thing remains – Guzha’s determination to nurture the African culinary identity.

Walking into Guzha’s shop is an education in flavours that have journeyed across the continent.

Through a mix of tastes derived from produce such as grape and kei apple from South Africa and bitter leaf and coconut from Uganda, Guzha’s sweet treats are more than just a dessert.

“I am inspired to unite Africa’s beautiful and diverse cultures in an ethical, tasteful, and delicious way,” Guzha says.

Tapi Tapi is surrounded by Mexican, Italian, and American restaurants, and Guzha is confronting this trend with a reintroduction to Africa’s distinct taste.

His tubs of frozen dessert stir up conversations about what local food really is. Using something as common and widely-loved as ice cream, Guzha is making indigenous flavours more accessible for people to experience.

“It is my hope that by normalising cultural dishes and by inventing new ways of celebrating continental flavours, I can inspire more positive attitudes and esteem in the African people,” Guzha says.

WATCH | How spartacus is from Soweto

As an avid rugby player, Scott Sloan realised the importance of community to mental health.
SebenzaLIVE
4 months ago
Next Article