Tsima takes sneakers from the village to the world 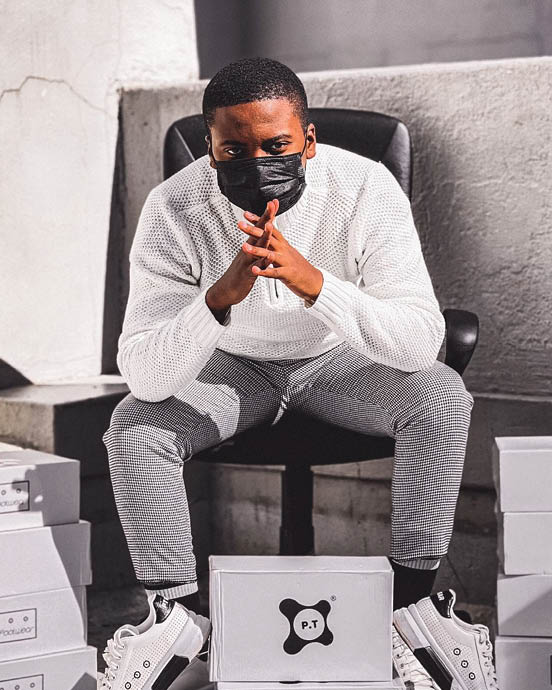 Mabushe Tsima is the founder of Pt Wear, a local sneakers and tracksuit brand.
Image: Supplied.

Mabushe Tsima (25) realised his dream of owning a sneakers brand in October last year, when he established Pt Wear.

It is a dream Tsima, from Ngwanamatlang in Sekhukhune in Limpopo, has been pursuing since 2018, although in the beginning he didn’t know how to go about it.

“There were not many local factories that had the capacity to make the sneakers I wanted. I did some research on how the local market operates and how I could find my space in it,” he says.

With the help of his single mother, Tsima raised some capital and started the manufacturing process.

“We focus on tracksuits and sneakers. Sneakers are an innovative and trendy way to tell our story. We want to be a culture brand.

“The first sneakers we released was the Sekhukhune Edition 1, which is named in honour of the great Bapedi king and his kingdom,” says Tsima.

He explains that his aim is to always honour African history, its people and its leaders.

“We are telling a story from an African perspective, by an African. We proudly speak for the village dream – our mission is to always make the village kid see that it’s possible to make it in life, no matter where you’re from. Our slogan is thus ‘From the village to the world’,” he adds.

Tsima says his journey has not been easy.

“Capital is at the centre of problems for us as young entrepreneurs. We have great ideas, but they are poorly executed due to high manufacturing expenses.

“We have had to destroy many sneakers while putting our concept together, this was a huge loss in terms of costs, which we are still recovering from.”

His message to the youth is not to wait. “Draft that logo and start now. Visit all the factories you can. Even though capital is important, starting is more important. Entrepreneurship is the future, especially for a black child," Tsima adds.

Born-and-bred in the township of Zola in Soweto, clothing entrepreneur Xolani Sibiya has set his sights on collaborating with lucrative shoe brands ...
SebenzaLIVE
3 weeks ago

Businessman Nape Phasha is not just the owner of a local SA clothing brand, he also wants to upskill his employees to establish their own brands.
SebenzaLIVE
1 month ago
Next Article