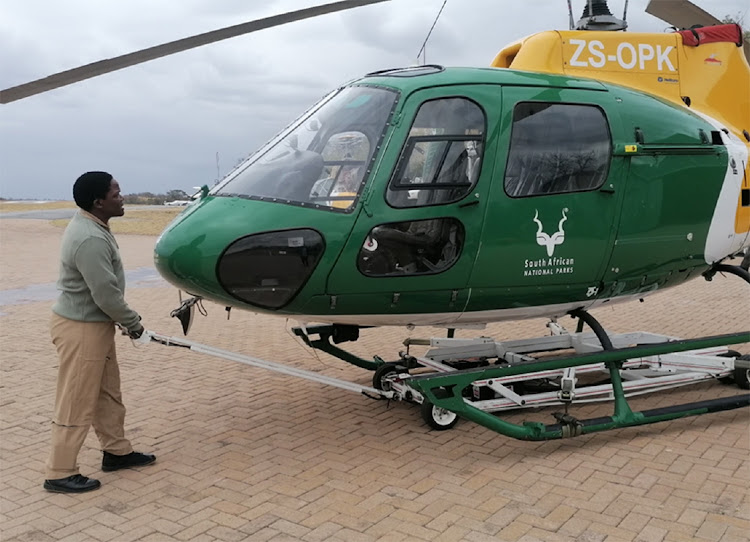 Simelane, 40, who studied in the US, had his first helicopter ride when he was 19.

“It was frighteningly exciting. We flew from Grand Central Airport towards Pretoria. I remember telling myself that I wanted to do this for the rest of my life,” he said.

At the time there was only one person of colour in the country qualified as a commercial helicopter pilot.

“I was determined to change that. Little did I know that it would be a painstaking task to find funding. I eventually got funding from the Transport Education Training Authority.”

His promotion sees Simelane moving from the rank of pilot to SANParks’ chief pilot.

He is now also responsible for operations, as per the SA Civil Aviation Authority’s (SACAA's) regulations.

“I am humbled by the trust vested in me and my team to take Air Services to new heights. I think it’s important that I am a person of colour, but that should not be the be all and end all of this promotion. I believe I have a lot to offer not just Air Services but the organisation at large.”

To youth hoping to follow in his footsteps, Simelane says being a pilot is not glamorous. “Forget becoming a pilot if you have no passion for aviation. Without passion, you will not see beyond the inevitable challenges on your journey to becoming a pilot.”

It comes as no surprise that Simelane, known as Black Hawk, is progressing through the ranks.

“He is a skilled professional pilot, with solid management and leadership skills, is approachable and has strength of character to boot,” said SANParks COO Lize McCourt.

When he arrived at the SANParks air wing in Skukuza, Mpumalanga, almost a year ago, Simelane wasted no time forging a solid relationship with the SACAA – an endeavour that serves SANParks well in terms of aviation compliance.

Air Services is part of the new Area Integrity Management Unit, which was established to better co-ordinate safety and security within SANParks.

“We believe the team will continue to excel with Simelane at the helm of Air Services and that he will take it to the next level. Fly Black Hawk, fly,” said McCourt.

Making face masks from discarded cloth has ensured a successful business for an innovative entrepreneur.
SebenzaLIVE
4 months ago

The realisation that some women feel uncomfortable exercising in front of men inspired Nolwazi Njilo (24) to open Femactive Studio, a women’s only ...
SebenzaLIVE
4 months ago

From the dusty streets of HaMutsha village, outside Thohoyandou in Limpopo, shoe entrepreneur Rihangwele Magoro has gone from a life of being ...
SebenzaLIVE
4 months ago

Born-and-bred in the township of Zola in Soweto, clothing entrepreneur Xolani Sibiya has set his sights on collaborating with lucrative shoe brands ...
SebenzaLIVE
4 months ago
Next Article