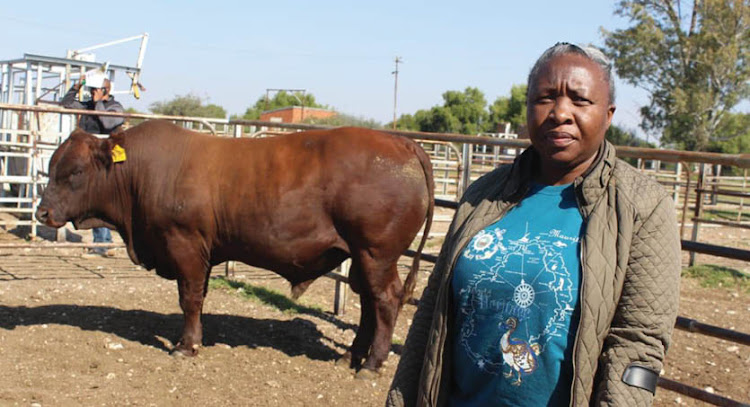 North West MEC for Agriculture and Rural Development Desbo Mohono says young farmers in the province must be given every opportunity to succeed.
Image: Supplied.

Ten young livestock farmers in the North West have each received a Bonsmara bull from the province’s Department of Agriculture and Rural Development.

The department tapped into its reserves to improve the farmers’ herds.

“We know the price of bulls is exorbitant and our people, especially young farmers, cannot afford them,” said MEC Mohono.

The Bonsmara breed is known for its high-quality beef and resistance to local diseases. It’s considered a top-tier breed, as it has a good breeding index.

In 2018, a Bonsmara bull fetched one of the highest local prices when it was sold for R1.8 million at the Up George Bonsmaras’ 20th Annual Production Sale.

MEC Mohono said the department did not need to spend that much, as the bulls are produced at its research farms. They underwent rigorous testing, by the department’s researchers, before being donated to the farmers.

“Each and every bull has its own DNA history and, most importantly, its own performance score. The bloodline and the way in which bloodlines work in harmony are very important factors that were considered when selecting them,” she added.

The bulls should help the farmers improve profit margins and reproduction.

One of the recipients, Olerile Lekgetho, said adding the bull to his herd is bound to improve his business.

“The bull came at the right time. I had just tested my cows for pregnancy and 35 of them were negative. The bull means a lot to me. A bull is a huge investment that can produce good quality calves, which means good money at an auction. I’m very grateful for the bull.”

He hopes to be in a position to also donate bulls to young farmers in the future.

Five former miners started a legacy agriculture project that not only aims to put food on tables, but to also stop their grandchildren from becoming ...
SebenzaLIVE
6 months ago

If you asked Lusanda Moletsane 15 years ago if she would consider a career in agriculture or farming, her answer would have been a definite "no".
SebenzaLIVE
7 months ago
Next Article