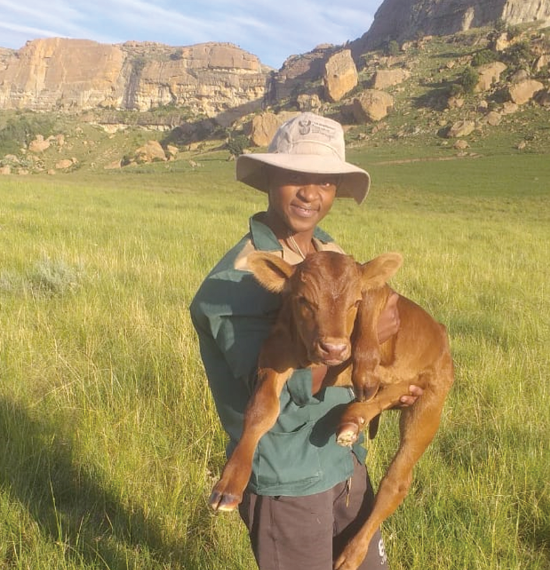 Mpho Moteka is the founder of Sterkfontein Farm.
Image: Supplied.

Mpho Moteka (26), from Qwa Qwa in the Free State, says his passion for agriculture motivated him to establish a farming business to create jobs for locals.

He is the founder and Chief Executive Officer of Harrismith-based Sterkfontein Farm, which is about 20 kilometres from his hometown.

“We also offer other products, including vegetables, such as cabbage and spinach, and beef,” he adds.

Moteka’s products are distributed in both the formal and informal markets.

Through the business, he has created five permanent jobs and also hires seven seasonal workers.

Moteka believes that job creation is one of the meaningful milestones he has achieved so far.

He says his business has benefited from government’s Illema-Letsema and Recapitalisation Programme, through the Free State Department of Agriculture and Rural Development.

The national Illema-Letsema and Recapitalisation Programme aims to support emerging farmers. It provides farmers with production inputs, but in a grant format, to encourage optimum production in all agricultural projects, particularly those in communal areas.

“The funding really assisted in increasing production for both our broiler and beef productions,” says Moteka.

For more information on funding, contact the Free State Department of Agriculture and Rural Development at 051 861 8311.

A group of black farmers in Tafelkop in Groblersdal, Limpopo are the proud owners of 189 hectares of land, which they have been farming for the past ...
SebenzaLIVE
10 months ago

If you asked Lusanda Moletsane 15 years ago if she would consider a career in agriculture or farming, her answer would have been a definite "no".
SebenzaLIVE
10 months ago
Next Article