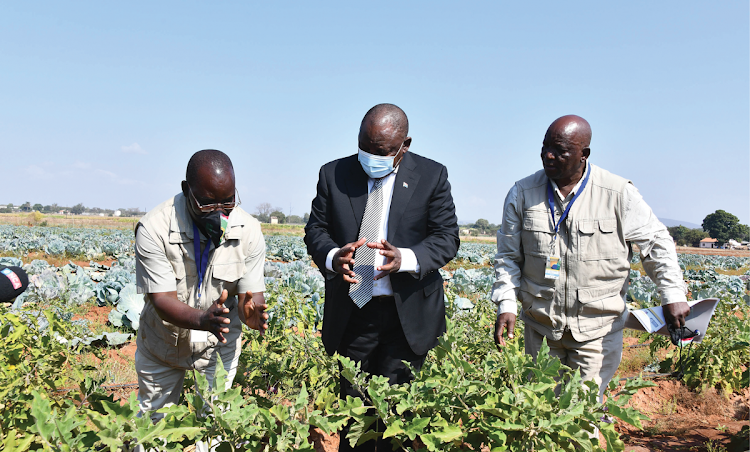 President Cyril Ramaphosa with farmers from Tafelkop, Limpopo, who recently received title deeds for the land they farm.
Image: Supplied.

A group of black farmers in Tafelkop in Groblersdal, Limpopo are the proud owners of 189 hectares of land, which they have been farming for the past 25 years.

The 30 farmers received title deeds for the land from President Cyril Ramaphosa after the Department of Public Works and Infrastructure transferred it for land redistribution purposes.

The land is valued at more than R25.5 million, but was handed over to the farmers for free.

“This is indeed a great day for the community of Tafelkop, for the people of Limpopo and for the whole of South Africa.

“Today we are witnessing a community’s dream being fulfilled. It is the vision that this community has spent the past 25 years fighting to see realised,” said the President at the handover ceremony.

The farmers have been successfully farming various agricultural produce on the land since 1996.

They organised themselves in the 1990s to be registered commercial farmers under the banner of the Tafelkop Farmers Association and started to engage government.

In 2000, the then National Department of Agriculture entered into lease agreements with the Tafelkop Farmers Association in terms of the Land Redistribution for Agricultural Development Programme.

The deeds were registered in the names of the farmers earlier this year.

The land is currently being used to farm tobacco, cotton and fresh produce.

Thirty-two households are supported by the land and farming activities which provide employment to 128 permanent workers and up to 320 seasonal workers.

Justice for the community

The President said the community had endured many hardships over the years and the “title deeds bring justice to a dispossessed community”.

“We have not forgotten the dispossession, land theft and forced removals that the people of this community and many communities across the country had to endure.

“We have not forgotten the harsh legacy of farming here in Limpopo, where farm-dwellers were forced to be labour tenants on their forefathers’ land and not allowed to own land to feed their families or graze their animals.”

He added that black farmworkers were exploited and abused in what was previously the Northern Transvaal.

“We also recall how the apartheid government supported white farmers with equipment, technical support and access to credit to build their businesses, but black subsistence farmers struggled to survive.”

Sixty-two black commercial farmers were identified across the country to benefit from the programme. They lease land reform farms from the department.
SebenzaLIVE
1 month ago

The President said the transfer of land inspires hope because it shows that with the right support and opportunities, the agricultural industry can be transformed for the benefit of the country.

“We celebrate our progress, because day by day our Land Reform Programme is gaining momentum.

“To date, government has redistributed over five million hectares of land, totalling around 5 500 farms, to more than 300 000 beneficiaries.”

So far, the land restitution process has benefited over two million land claimants and resulted in the transfer of around 2.7 million hectares.

“Land reform isn’t just in the interests of redress, justice and social cohesion. It is also about economic development. Agriculture and the agriculture value chain can and must transform rural economies,” said President Ramaphosa.

“We are looking at how effective our past policies have been. We are going to address this issue of land reform urgently.”

The President said government was working hard to correct what went wrong during the apartheid years and since the start of democracy.

“We do this in tribute to those who lived among us; who resided here.”

Land reform is vital to improving the country’s food security, building an inclusive economy and providing a better future for all South Africans, added the President.

He urged the Tafelkop farmers to use the land wisely and for the benefit of the community.

“For me, today has been the best day in the office; to kick the soil and dust and see your produce.

“I have no doubt that with the commitment and energy of all involved, this project will continue to thrive,” he said.

Chairperson of the Tafelkop Farmers Association Jerry Sefoloshe thanked government for making it possible for the farmers to become the owners of the land they have worked for decades.

After a successful career as a swimmer, Sibusiso Mogale (30) has ventured into farming and urges people living with disabilities to follow their ...
SebenzaLIVE
1 month ago
Next Article