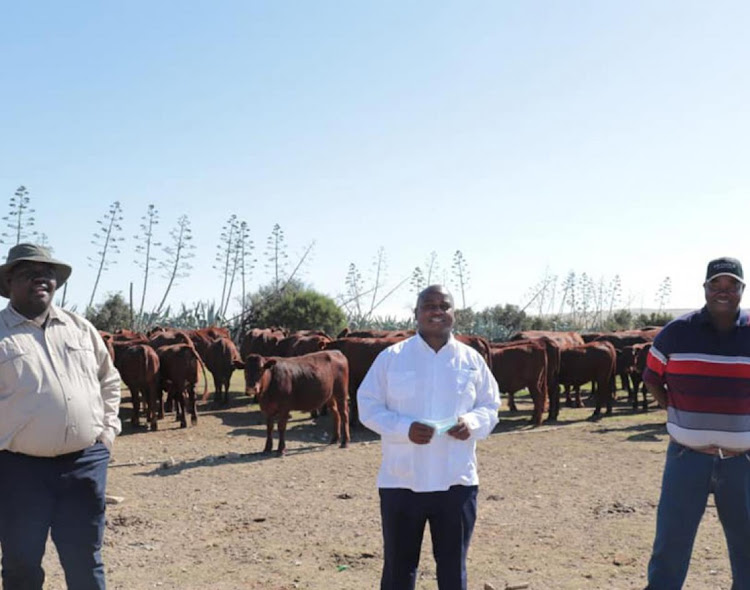 Some of the farmers in the Eastern Cape who received livestock and machinery from government.
Image: Vukuzenzele

Four farms in the Joe Gqabi district in the Eastern Cape recently received livestock and machinery worth over R35.5m from the department of agriculture, land reform and rural development.

The farms were selected as pilot projects for the department’s development support programme, which is part of the economic reconstruction and recovery plan announced by President Cyril Ramaphosa.

Sixty-two black commercial farmers were identified across the country to benefit from the programme. They lease land reform farms from the department.

The department's deputy minister Mcebisi Skwatsha says the support will ensure that the farmers are sustainable and help eradicate poverty in their communities and the country.

Skwatsha commended the work at Wepender Farm, where the Imbumba Cooperative received 105 sheep. He says he is inspired by the youth’s involvement in the agricultural sector.

“By having young people farming, we are building the future of the nation. We should be proud that some of the farmers are young. Gone are the days when we only saw elderly farmers."

He received 128 Bonsmara cattle, which will make a major difference to his farm.

Yalezo arrived at the farm in 2014 and says it was hard to operate, but he persevered.

“Now that I have been provided with a quality beef-producing breed, it will be easy to sell my livestock after battling for years. The tears I had have been wiped away,” he says.

“I am thankful to the government for what it has done for an independent woman like me. I want all women to see a living example in me – go and ask for help and the officials will assist you,” she says.

In addition to infrastructure, machinery and livestock, the department will also provide the farmers with skills development and market access opportunities.

A father and son, who founded a 100% black-owned dairy business, want to give opportunities to small and emerging farmers in the milk production ...
SebenzaLIVE
1 month ago