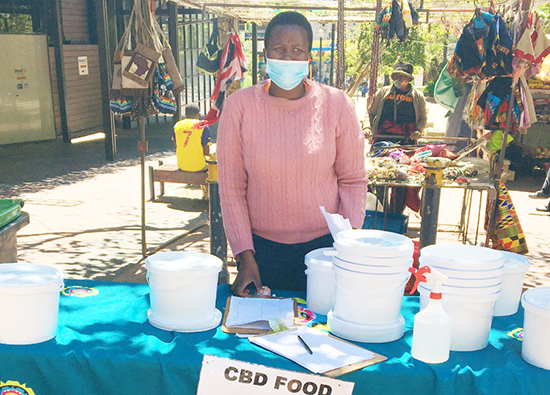 Bulelwa Xubuzani is one of the workers involved in the City of Cape Town’s food waste diversion project.
Image: Supplied.

The City of Cape Town has launched a pilot project to divert organic food waste from landfills and is calling on the public to participate.

According to the city’s Mayoral Committee Member for Water and Waste, Alderman Xanthea Limberg, South Africa faces significant challenges relating to food loss and waste, with an estimated 12.6 million tonnes of food wasted in the country every year.

National and provincial government have responded to this challenge by setting a provincial target of 50% diversion of organic waste from landfills by 2022 and 100% diversion by 2027.

Participants are given an information leaflet and a five-litre bucket, which they take home to fill with food waste and store in their fridge.

When the bucket is full, they return it to the site where it is decanted, cleaned and given back to the participant. The food waste is then taken to a city solid waste facility to be weighed and composted.

“To date, between 50 and 100 residents across the eight sites have registered for the programme and over 430 buckets have been handed out,” says Limberg.

Marcela Guerrero Casas (41), one of the participants, was thrilled to hear about the programme.

“This has always been a challenge, not only in Cape Town, but in other cities too. It is clear that we have a global organic waste problem. This matters because organic waste in landfills produces methane, which contributes to climate change," he says.

The trial started on 15 February and runs until 30 June, when the city will evaluate its effectiveness.

For a list of drop-off and pop-up sites and operating hours, email re.cycling@capetown.gov.za.

Acceptable organic waste that can be placed in the buckets includes: