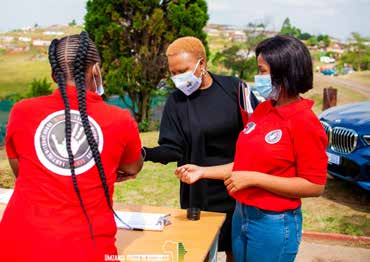 Minister of Social Development Lindiwe Zulu paid tribute to the work being done by social workers when she conducted an outreach programme in Pietermaritzburg, KwaZulu-Natal, recently.

She said social work is at the heart of government’s work to build a more humane and caring society.

“From large caseloads, a lack of necessary tools of trade and increased social ills, such as GBVF and substance abuse, social workers are increasingly called on to respond to a myriad of socio-economic challenges confronting our young democracy.

“In the midst of the lockdown, I witnessed social workers on the frontlines of our national response going beyond the call of duty by providing much-needed services under the most difficult circumstances,” she added.

The Minister said one of the key issues that needs to be addressed is the high number  of unemployed social work graduates.

“This is a serious concern for us, especially with the rising social ills in our country.”

During the Coronavirus pandemic, the department absorbed 1 300 social work graduates into the system, on a three-month contract.

After three months, over R75 million was made available as part of President Cyril Ramaphosa’s Employment Stimulus Package to keep the graduates employed until the end of March 2021.

“We must commend provinces, such as the Free State, which absorbed these social workers permanently. We call on other provinces to do the same,” said Minister Zulu.

The department is in discussions with other stakeholders in the sector to determine how more graduates can be absorbed.

Minister Zulu’s outreach programme also focused on GBVF hotspots and mobilising young people to play their part as agents of change, by promoting a culture of respect for human rights, gender equality and GBVF prevention.

The Minister also officially opened the Umzansi Youth in Business Digital HIV and Resource Centres in Sweetwaters, which will assist youth with various aspects of development, including business research, printing of CVs, training for interviews and inclusion in various social behavioural change programmes.

Women uniting to protect each other to end GBVF

Women runners are uniting to protect each other and to stand up against gender-based violence and femicide.
SebenzaLIVE
1 year ago
Next Article