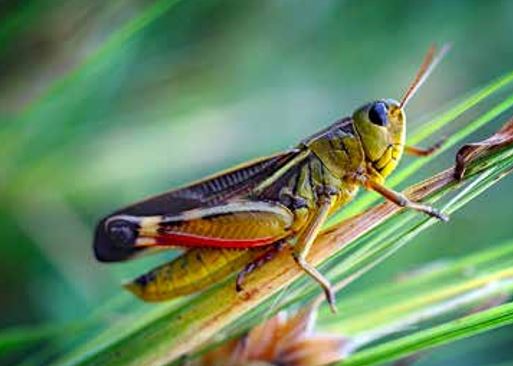 The brown locusts, mostly found in the semi-arid Karoo region of the Northern Cape, Eastern Cape and Western Cape, can migrate over large areas and have  been detected in several towns in the province.

Kgakatsi says: “The brown locust hatches in high rain areas. With the heavy rains around the province, we are experiencing a lot more of them than we normally would have. In the past few weeks, we’ve seen a significant increase in the pests.”

Kgakatsi says the spread of the locusts can be managed by spraying a pesticide that DAEALRRD freely avails to farmers.

The pest, found in solitude or large groups, is identifiable through its various colours, according to Kgakatsi.

The locust begins life as a white locust and then turns red. At this stage, they are still small. Once red, the locust develops the ability to hop. At full maturity, it turns brown and can fly great distances, says Kgakatsi.

He says the ability to fly enables the brown locust to damage crops for hundreds of kilometres.

“We’re also working with farmers to target farms that have experienced the impact of the locusts. We compensate them for using their spraying equipment to help us combat the pests.”

The locusts, which are mostly active during summer, often use unused farmlands as breeding grounds.

Kgakatsi says locusts can hatch up to 500 eggs at a time, which can remain undeveloped for months.

Kgakatsi has urged farmers to assist by reporting sightings of these locusts, as they could have a serious impact on their production and the general economy of the province.

To combat the spread of the locusts, the DAEALRRD has appointed locust control contractors and is distributing insecticides, protective clothing and spray pumps.

A KwaZulu-Natal woman farmer is pleased that the government is supporting emerging female farmers, especially those who come from previously ...
SebenzaLIVE
1 month ago