Here's how Zinn changes the perspectives on the streets 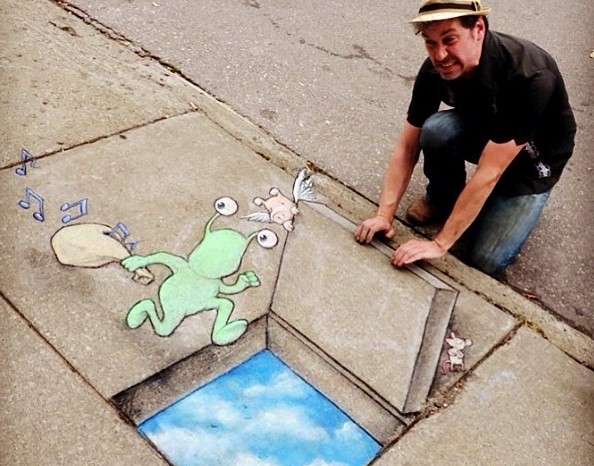 We often forget to appreciate what’s right in front of us. So artist David Zinn is using his talent to draw people’s attention to what's under their feet.

Self-taught, Zinn has practised his art for 25 years. However, a blank page always gave him pause as fear stood in his way.

To escape the pressure, Zinn started doodling on pavements. It was here that he discovered his imagination thrived. Armed with chalk and using the streets as his canvas, his artworks come to life.

From little cats to flying pigs, Zinn’s magical animals have appeared on pavements across Michigan.

Incorporating his imagery with what’s already there, cracks, manholes, and weeds create the perfect textures for his art.

Zinn’s creations appear 3D, bringing out beauty that people would otherwise never notice. And once the rain pours down, the creatures disappear forever.

“I think it’s very therapeutic to embrace the non-permanent nature of the art, which is no different from everything else,” Zinn says.

A reminder of life’s fragility, his work not only brings unexpected joy, but provides onlookers with a sense of meaning.

“Imagination has the power to let us accept more than what’s actually there,” he says. “Sometimes, the bravest thing you can do is pursue what makes you happy.”

Duncan Stevenson feared for his loved ones when he heard the COVID-19 infection rates.
SebenzaLIVE
4 months ago

Babies grow rapidly. In fact, they outgrow up to seven sizes within the first two years of their lives.
SebenzaLIVE
5 months ago
Next Article