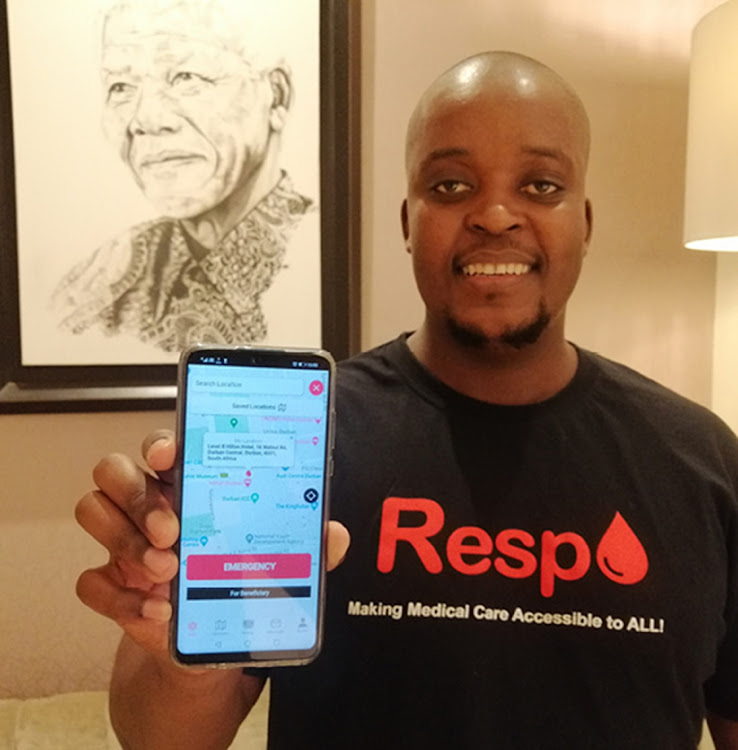 Blessing Nzuza is an innovative entrepreneur who has created a mobile app which allows South Africans to request an ambulance at the click of a button.
Image: VUKUZENZELE

Watching a stabbing victim bleed on the Durban beachfront despite two stationary ambulances nearby prompted Blessing Nzuza, 30, to develop a potentially life-saving app.

The mobile app, called Respo, links South Africans with ambulances regardless of whether they have medical aid or not.

“The incident got me thinking that we needed to create a system that allowed people in emergencies to contact ambulances, even when they are not able to place a phone call,” says Nzuza.

Respo enables users to request an ambulance during a medical emergency by simply opening the app and pushing a button. Even people without smartphones are able to access the app’s functions through a recently added panic button feature.

Once a user activates the emergency button, the team from Respo calls them to establish the nature of their emergency and if necessary, an ambulance is dispatched. If the person does not answer their phone, Respo immediately informs its partner, ER24.

GPS tracking is used to locate users in emergencies and emergency service providers are given essential information about the patient, such as existing medical conditions and their medical aid, should they belong to one. This information is provided by users when they install the app. They also list their emergency contacts, who are alerted in cases of emergency.

Nzuza developed the app using a R487,000 grant from the Technology Innovation Agency, which is a government entity that helps develop innovative projects in the natural resources, energy, information communication and technology and advanced manufacturing fields.

Projects are funded from conception stage right to when the product is commercialised.

Once his app was developed, Nzuza successfully pitched for R1m in funding from the Small Enterprise Finance Agency (Sefa). “The funding from Sefa gave us the capacity to market the app. We used the money to form a partnership with ER24.”

• This article first appeared in Vukuzenzele

James Baloyi from Roodepoort is in the field of software development and is also a mobile app developer who creates useful apps that provide a real ...
SebenzaLIVE
1 year ago

A financial literacy and information and communication technology skills development programme for the youth in Mabopane, Tshwane, is producing ...
SebenzaLIVE
1 year ago
Next Article