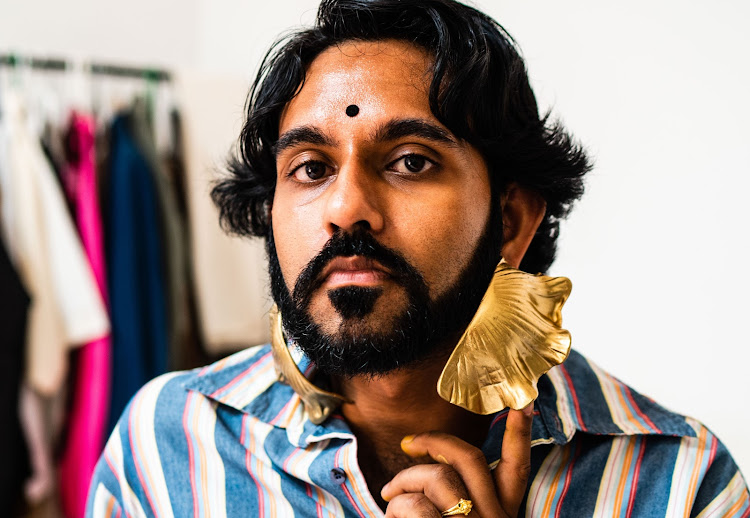 When jewellery-maker Githan Coopoo was diagnosed with HIV, he realised how few people openly spoke about the virus.

“There wasn’t anyone on social media I felt I could associate with,” Coopoo says. With the help of friends and family, Coopoo found his confidence and strength again.

“I was incredibly held and supported by my community,” he says. “That was the driving force that made me want to champion a new kind of ideology around HIV-positivity.”

Coopoo is now correcting negative perceptions around HIV using the power of social media and his art.

Creating accessories primarily from ceramics, the self-taught designer moulds each item to make a statement. He’s known for his earrings, which are oversized yet fragile.

“It’s an outlet that allows me to express whatever I want to,” Coopoo says. The verve with which he approaches his craft is a reminder that he is an artist, a visionary, an inspiration – and so much more than his status.

“One’s life does not need to be punctuated or defined by your HIV diagnosis,” Coopoo says.

He was recently lauded for donning a massive red ribbon, designed by Blünke Janse van Rensburg, that looped around his shoulders and extended down to his knees.

Coopoo posted a photo of the accessory on Instagram alongside the caption, “Closets are for clothes, not people. I am HIV-positive and proud.”

Having garnered a loyal following for his jewellery, Coopoo is using the platform to show how he’s living life to the fullest, while inspiring others to do the same.

WATCH | The designer bringing her kingdom’s heritage to global runways

What we wear carries meaning.
SebenzaLIVE
10 months ago

WATCH | How this invention is saving thousands of lives

While volunteering at an orphanage in Kenya, Kenton Lee encountered a young girl stumbling along Nairobi’s dusty streets.
SebenzaLIVE
9 months ago
Next Article