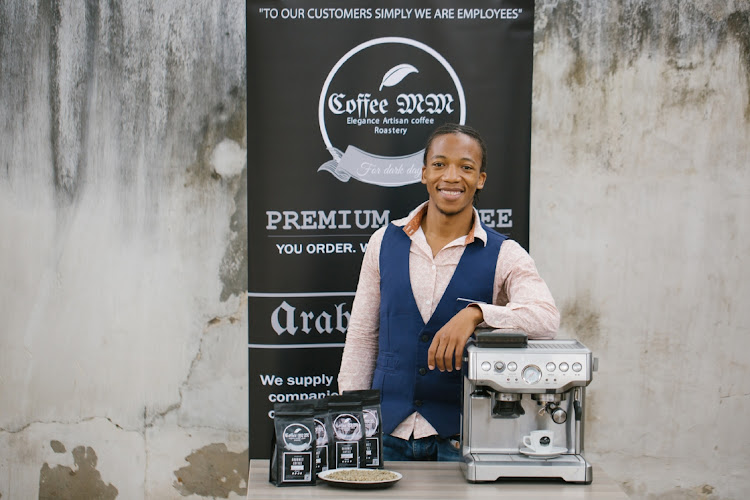 Mhlengi Ngcobo is the founder and owner of a coffee roaster which he started when he was diagnosed with young hypertension.
Image: SUPPLIED

Being diagnosed with hypertension at the young age of 13 and then being warned to stay away from caffeinated drinks sparked a curiosity about the beverage in Mhlengi Ngcobo.

Now Ngcobo, 25, a fourth-year civil engineering student at the University of Stellenbosch, is the owner of a coffee roasting business called Coffee MM that sells coffee online using E-commerce and supplies restaurants and companies with fresh coffee.

He sources his raw coffee from smallholder farmers in SA and other countries on the continent.

Ngcobo’s business was  recently named the business with the most potential at the Small Business Academy (SBA) programme, which is sponsored by Stellenbosch University.

Talking about his unlikely route to starting his coffee business, he said: “I was playing with my friends after school when I suddenly experienced a severe headache, feeling dizzy and tired. I was rushed to  hospital and my blood pressure was 188/125, far above the normal reading of 120/60.”

He said the doctors struggled to find the cause of his blood pressure and he was told he had only10 months left to live.

He says his love for coffee deepened at university when his class was given a project to choose a business they would specialise in.

“I chose a project of running a coffee roaster and in 2017, I launched my coffee business. At the time I was under the impression that everyone drinks coffee and the business was going to do well. However, I only managed to sell one bag of coffee to a family member.  I had to go back to the drawing board and understand what the company needs.”

Ngcobo said he did more research and also focused on improving his marketing. He said things were difficult as he only had a bicycle and a grinder, which he bought for R150.

“I would cycle 400km a week to make deliveries to my customers. I also had to sell some of the things I had. For instance, I had two laptops and I sold one so as to buy a bigger machine to grind. My studies were funded by the National Student Financial Aid Scheme and I would sell my voucher to other students so as to save money.”

Ngcobo said even though he has a motorbike and some of the machinery he needs,  he is still using very small machines.

Last year, he got funding from National Youth Development Agency to buy machines for processing.

He is now focusing on getting  a bigger roasting facility that will allow him to offer training to interested individuals, especially black women.

The Covid-19 pandemic has led to millions of people losing their jobs but it has also birthed a lot more entrepreneurs.
SebenzaLIVE
1 year ago

The group also charge R10 to accompany people walking to work before dawn, as Nyanga is known for its high crime rate.
News
1 year ago

Diketso Setho (25) is the owner of GH Mall, an online mall that gives township businesses the opportunity to sell their products online.
SebenzaLIVE
1 year ago

Entrepreneur on mission to create superwomen

Milisa Mabinza, the founder of one of South Africa’s first solely black-woman-owned private equity fund for black women tech start-ups, is ...
Business
1 year ago
Next Article