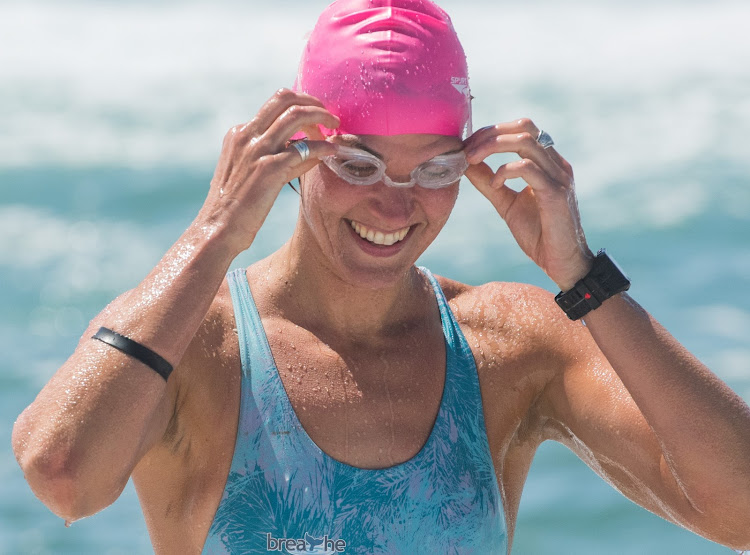 Sport was always going to be Sarah Ferguson's life. She excelled at athletic endeavours growing up, with her tall, dynamic build lending itself most naturally to swimming.

Ferguson started representing South Africa in the pool in the late 90s, but after enjoying a fifteen-year-long career, she changed lanes.

Already working as a physiotherapist, retiring didn’t mean abandoning sports. And though she was compelled to leave competitive galas behind, Ferguson felt certain her athletic adventures were not yet over.

She felt fresh inspiration on a visit to a swimming club in Hawaii, where she was invited on a two-kilometre sea swim, her inaugural dive into long distance and first paddle of any sort since leaving the professional pool.

Ferguson loved it, and arrived home with new ambitions. With the sea swirling about her head, her training began.

Then came the big one. In keeping with the trend of exponential growth, she returned to the place where it all started to become the first African to conquer the 42-kilometre Ka’iwi channel.

An avid conservationist, Ferguson harnessed the publicity she generated to create awareness about the need to protect our oceans from single-use plastic.

From here, she aims to keep swimming with the goal of spreading knowledge about protecting the planet and inspiring young women to chase their dreams.

The youth of South Africa are fighting for their right to education.
SebenzaLIVE
1 year ago

WATCH | How to turn a litter problem into community-wide empowerment

Poverty is an overwhelming challenge in South Africa. As people confront economic difficulties.
SebenzaLIVE
1 year ago

WATCH | The hijabi tackling expectations of a rugby player

Zahraa Hendricks had a game to win. To her, scoring tries was the challenge, not wearing a headscarf.
SebenzaLIVE
1 year ago
Next Article