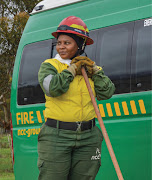 Young firefighter Vuyiseka Arendse (26) is part of Crew Juliet, South Africa’s first all-female wildland firefighting team. Her strength and determination to make a name for herself in the male-dominated world of firefighting is a true inspiration to all women.

Arendse grew up in the small Western Cape town of Beaufort West. After school, she tried studying at a college in Oudtshoorn, but decided to move back home to support her family. She worked at a supermarket for a while, but then firefighting caught her eye.

“I saw the firefighters in their uniforms and the big red trucks. I immediately became interested and wanted to find out more,” says Arendse.

Arendse was one of the graduates of the Western Cape government’s Chrysalis Academy youth development programme in 2016. After the programme, she worked at the fire station in Beaufort West, earning only R1 900 per month. But then she came across an opportunity offered by NCC Environmental Services last year.

“I was at Chrysalis Academy as a facilitator when NCC came to talk to the students about the opportunity to apply for training for the first all-female wildland firefighting team. Even though I was not one of the students, I was very interested and applied for the training, and I was accepted,” Arendse says.

Arendse went through the training, which combined theory and practical aspects of firefighting.

“I learnt so much. For one, I didn’t know that there were firefighters tasked with putting out wildfires. I had previously thought they only worked in towns to put out fires in buildings,” she says.

Arendse adds that it was an amazing feeling to pass the training and become part of the first all-female firefighting team of its kind.

“I felt very excited, especially because when I had told people I wanted to be a firefighter, many of them said I could not do it because I am a woman and would not cope with the job. This pushed me to show them that I can actually do it, not only for myself but for the rest of the women in South Africa.”

Arendse says that fighting her first major fire in Noordhoek was a challenging but highly rewarding experience.

“It was my first full 24-hour shift and the first time we were working with all the other male firefighters. It was tiring and very hot in our protective gear but we finished the job and the feeling afterwards was very rewarding.”

Arendse encourages the women of South Africa to never underestimate themselves.

“Don’t be defined by what people say you can and can’t do.”