WATCH | After being forced to leave his home country, this creative teaches the art of belonging 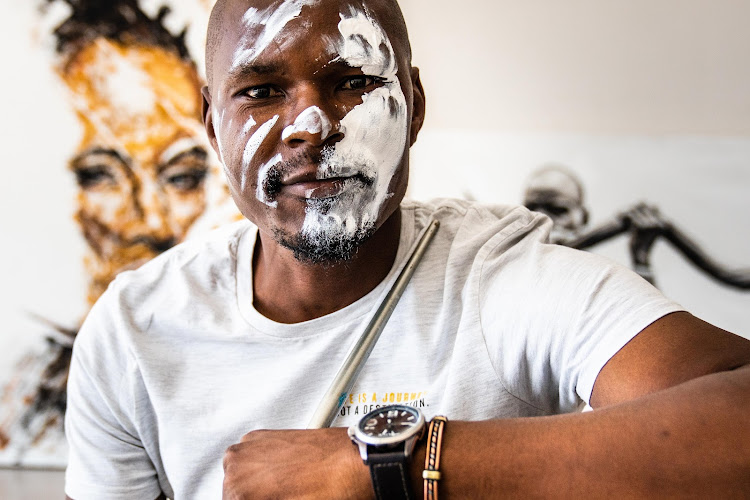 Solomon Mugutso, uses art to create a space where people could explore their backgrounds and connect with each other.
Image: Beautiful News.

Where do you belong? Solomon Mugutso, a 42-year-old artist, was forced to leave his home in Zimbabwe.

When he relocated to South Africa, he struggled to find a space that welcomed him.

“Having moved around a lot in my life, it made me feel displaced,” Mugutso says. But soon enough, he discovered more people like him.

Using art, Mugutso began creating a space where people could explore their backgrounds and connect with each other.

In his childhood, Mugutso would sketch out the unique features of those he saw on the street.

Today, his preferred medium is sand. Mugutso collects soil from the different places he visits and unites them in a single portrait piece – one face that symbolises many.

His works represent the collective consciousness of people from separate areas.

Mugutso is also a committed art teacher who offers free classes to all those interested, no matter where they’re from.

“Why would I charge for a material I know I have in abundance?” he asks. “Art makes me feel like I belong and I’d like my students to feel the same.”

Mugutso has exhibited in Zimbabwe, South Africa, and even across the seas in Sweden.

In 2019, he was the Most Recommended Artist at the Rosebank Rotary Arts Festival.

Covering a range of issues through his work, such as marginalisation and gender-based violence, Mugutso interlinks a diversity of viewers through the emotions conjured in his pieces.

“Art has given me a place in this world,” he says. Through individual expression, he’s creating universal connection.

WATCH | How Machana unearths tenacity on a tree farm

He’s had to struggle for much in his life, but there are some things Witness Machana has no lack of, like ambition and tenacity.
SebenzaLIVE
2 years ago

WATCH | How these winged pirates are the soundtrack of Africa

Their distinctive call carries across the plains.
SebenzaLIVE
2 years ago

The fight for truth is in Lukhanyo Calata’s blood. When he was three years old, his father was killed by security forces for his activism.
SebenzaLIVE
2 years ago
Next Article