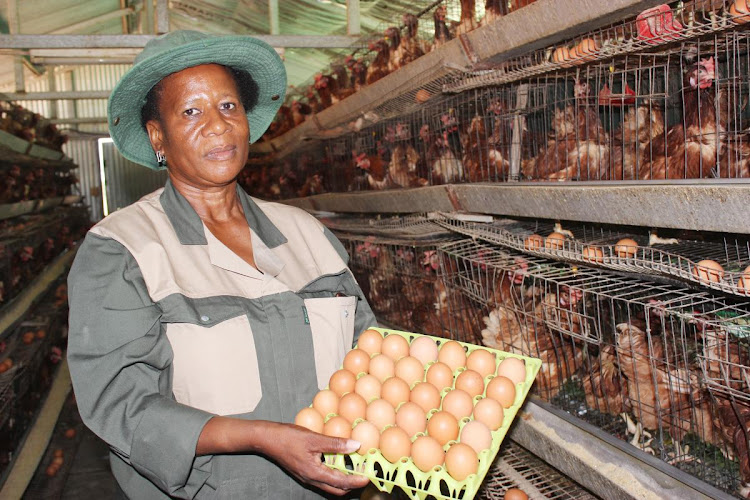 Maggie Mokgosho from the Segometse Bagoshi Agricultural Project, which produces an average of 8 500 eggs a day.
Image: Supplied.

A Winterveldt poultry farm is benefitting from government’s plans to make poultry a leading industry in the country.

The Segometse Bagoshi Agricultural Project received 800 50-kilogram bags of laying mash from the Gauteng Department of Agriculture and Rural Development.

The mixed farming project has an additional 15 000 layer chickens that are yet to produce eggs as well 134 cows, 88 sheep and 97 goats on a 10 hectare farm.

“The chickens we have at the farm produce between 8 300 and 8 700 eggs daily. Our eggs are mostly large and jumbo sized.”

The eggs are sold to local wholesalers, old age homes and shelters for the homeless, among others. Mokgosho co-owns the co-operative with her daughter Jessica (28), nephew Kagiso Somo (28) and sisters Mavis Phiri (61) and Eunice Monare (56).

Six permanent staff members have been employed and during busy periods, 12 temporary workers are sourced from the local community.

Segometse Bagoshi also offers practical experience to people studying agricultural courses at higher education institutions. At the moment, 15 students from Umfolozi TVET College in KwaZulu-Natal are being trained at the farm.

Supporting the poultry industry is one of government’s priority areas. At the second Investment Conference last year, President Cyril Ramaphosa signed the Poultry Sector Master Plan, which was developed by government working with industry players in the sector.

The plan involves expanding the industry by increasing capacity at all stages of the poultry sector value chain. This will, in turn, increase the fixed investments, employment and the value of the sector’s output.

Government and the poultry sector have agreed to work together to revamp the certification systems so that South Africa’s chickens are able to meet the requirements of major poultry importing countries.

Tshepang Mamabolo (16) from Orchards in the north of Pretoria is a trampoline gymnast who won his first international medal during the 27th ...
SebenzaLIVE
1 year ago

WATCH|How entrepreneurship is popping up on the streets of Khayelitsha

Rates of unemployment in South Africa rose to 29% in 2019, the highest ever in the past decade.
SebenzaLIVE
1 year ago
Next Article