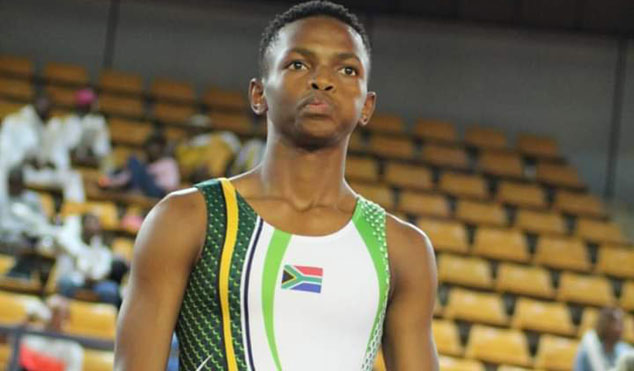 Mamabolo walked away with a silver medal in the 15-16 age group for double-mini trampoline gymnastics.

“I was overwhelmed. My parents, coach and the rest of my team members were proud and excited because they knew that I had always wanted an international medal.

I have always wanted the world to know that South Africa has talent,” said Mamabolo, who has been a member of the Klim-Gim Trampoline Club since starting the sport in 2011.

“My mother’s colleague told her about the club and my mother took me to their trials. I was accepted into the club.

It was not difficult for me because I liked to do flips from an early age. My friends and I would flip while we were playing and sometimes, I would even do flips while walking with my parents in a mall,” he said.

Mamabolo is ranked first in South Africa in individual trampoline and first in double-mini trampoline in the 15-16 age group.

He loves the sport because it has enabled him to tour the world.

“In 2015, I went to my first international competition in Denmark. I have also been to New Zealand, Bulgaria and Russia in 2016, 2017 and 2018, respectively. Last year, I went to Japan and then I went again in January for a training camp,” he said.

Mamabolo is a Grade 10 learner at Hoërskool Overkruin in Pretoria and wishes to become a software engineer.

“I am hoping the University of Pretoria will accept me when I apply for admission because I would like to pursue my studies and continue to polish my talent as a trampoline gymnast there,” he said.

His coach, Offering Tlaka said South Africa’s junior gymnasts generally don’t get sponsored and their parents have to fund their trips, which places additional strain on the athletes.

His club too is in need of a financial boost. “The trampoline we are currently using is about 15 years old and every year a new one comes out and it performs better. We are always at a disadvantage when it comes to competitions because of that,” he explained.

A stutter needn't be a stumbling block

Too many people battle with stuttering without knowing that therapy can improve their speech.
SebenzaLIVE
1 year ago

WATCH |Why Jabulani was the luckiest baby elephant in South Africa

Jabulani was beginning to wean off his mother’s milk when his life changed forever.
SebenzaLIVE
1 year ago
Next Article