Bicycles give way for better mobility 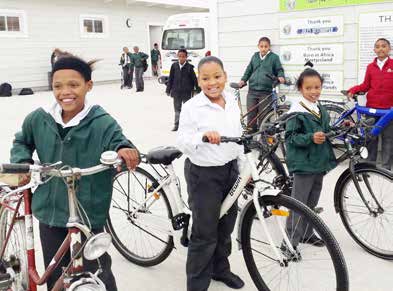 Over 1 500 people in rural communities in the Western Cape no longer have to walk long distances, thanks to the Bicycling Empowerment Network (BEN).

This non-profit organisation was started as a way of improving mobility for people living in areas where access to transport is difficult. Bicycles are safe and reliable, environmentally friendly, cheaper than public transport and promote a healthy lifestyle.

BEN has partnered with government and donor agencies to distribute thousands of bicycles to the people who need them most.

“BEN’s mission is providing access to opportunities through the use of a bicycle – giving hope and a step up to those who need it most,” explained BEN General Manager Tim Mosdell.

Nathan Nelson from Zandvlei said having a bicycle has been very convenient for him, especially because he is involved in community work. Instead of having to walk for miles, or rely on expensive taxis, he now hops on his bicycle and heads off to his destination.

One of the most successful partnerships BEN has been involved in is the Bike4All programme, started in 2017, which has seen BEN, Pedal Power Association (PPA) and Qhubeka deliver over 1 150 bicycles to communities.

To cater for younger riders, over 300 BMX bicycles have been distributed to children, along with helmets and safety bibs. The Cool Kid on a Bike programme is presented to groups to teach them safe cycling principles before the bicycles are handed over.

Bicycles are distributed through Bicycling Empowerment Centres which are managed by community members. This stimulates economic growth and job creation in rural areas.

“Community-based entrepreneurs have been trained in small business management and as bike mechanics. The establishment of the centres promotes employment creation while providing BEN with a good distribution network,” said Mosdell.

In November 2019, BEN, Qhubeka and PPA were chosen to lead the Western Cape Department of Transport and Public Works’ new bicycle distribution initiative. During the first year of the three-year programme, 400 bicycles will be distributed.

When Mkhululi Gosa (20) of Khayelitsha in the Western Cape was just seven years old, he used to play with his peers at a community hall.
SebenzaLIVE
2 years ago

See those stylish images on social media? They don’t portray the diversity of this world.
SebenzaLIVE
2 years ago
Next Article