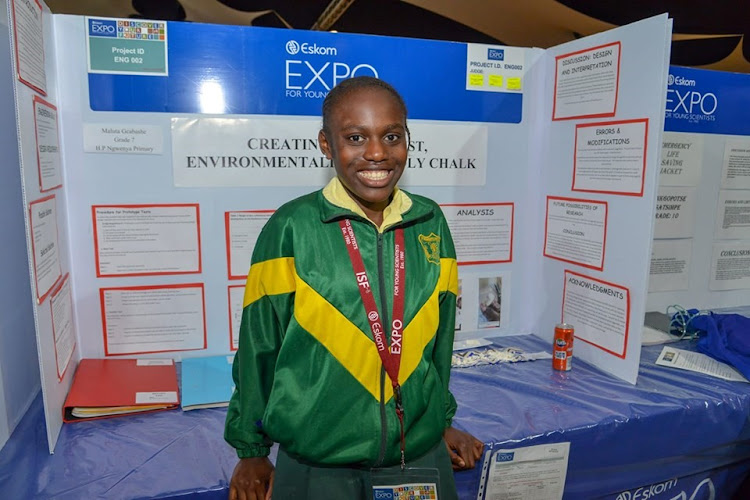 A primary school science experiment has earned a young girl national recognition and may herald some good news both for teachers and the environment.

A Grade Seven pupil of HP Ngwenya Public Primary School in Chesterville, Durban, has chalked up a win for teachers.

The young teen has created a chalk that emits minimal dust and is environmentally friendly.

Maluta Gcabashe (13) hit upon the idea after noticing how her teachers were often covered in chalk dust. “Most teachers get their hands dirty when they write on the board. Chalk dust is also not healthy to breathe in,” said Gcabashe.

She set about researching chalk production, reading scientific articles and watching videos she found online. “I learned the techniques online with my mentor but then applied my own additions to the concept,” she said.

Her first chalk was Maizena-based and was moulded in a toilet paper inner that she had made narrower. The second used eggshells, Maizena and water. “I took the eggs’ inner membrane and then ground it using a mortar and pestle. I ground it until it was a fine powder, before mixing it with Maizena,” she said.

Both mixtures were then left to set for 24 hours.

The invention got the nod from teachers at a neighbouring high school. “I took my chalk to teachers at Bonela Secondary School and asked them to try it out and they wrote recommendations saying they would use the chalk,” Gcabashe explained.

Gcabashe was also recognised at the Eskom Expo International Science Fair, where she was awarded the Best Development Project prize.

“The chalk needs to be produced locally using recycled and natural material. I hope it will become accepted by teachers as an alternative to both standard chalk and the kind of chalk one can buy that is dustless,” said Gcabashe.

The Siemens Grand Prize at the expo went to Pinky Jiyane from Ongoye Secondary School, also in KwaZulu-Natal, for her Ultra Smart Meter. The meter will allow people to remotely check their prepaid electricity balance and load more units, if needed.

Jiyane will receive a three-and-a-half-year international technical apprenticeship at Siemens in Berlin.

Parents should not think they cannot improve the quality of the education their child receives before primary school.
SebenzaLIVE
2 years ago

The Buyelekhaya Festival is one of the Eastern Cape’s hottest but the real heat of this year’s celebrations are cooking at the fashion studio of ...
SebenzaLIVE
2 years ago
Next Article