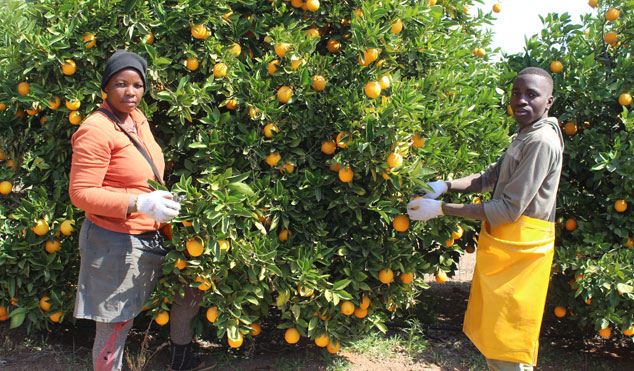 The agricultural project was established in 2012 by members of a Brits family that today leases 61.5 hectares of land from the now North West Department of Agriculture and Rural Development.

One of the five members of the co-operative, Issac Moilwa, said they initially grew sunflowers but after two years decided to diversify into citrus.

Today, Batlhako Temo Services is the first black-owned citrus producer in the province to enter the global market, with its produce heading for the Middle East and Taiwan.

“Our success is made possible by the support we get from the department,” Moilwa explained, adding that the department provided R1 600 000 in funding between 2014 and 2017.

“We used the funds to improve our irrigation system and to structure our office space and logistics.

“We have also been receiving technical advice from the department and we have managed to increase production because of that,” he added.

The co-operative is part of the Citrus Growers Association, which generally supports its members to be globally competitive.

To date, the co-operative has employed 10 permanent workers and over 70 seasonal workers. It has 16 000 citrus trees.

Moilwa said there are still challenges facing the co-operative, such as not having its own pack house.

“A pack house will cut a lot of costs and eventually lead to us employing possibly over 200 people. We would like to make a greater contribution to job creation,” he said.

North West Agriculture and Rural Development MEC Desbo Mohono has encouraged the co-operative to work even harder and grow its global market. "I would like to see more farmers expanding their territories," she said.

It’s one thing pursuing a musical career but a whole other thing financing it from your own pocket.
SebenzaLIVE
2 years ago
Next Article