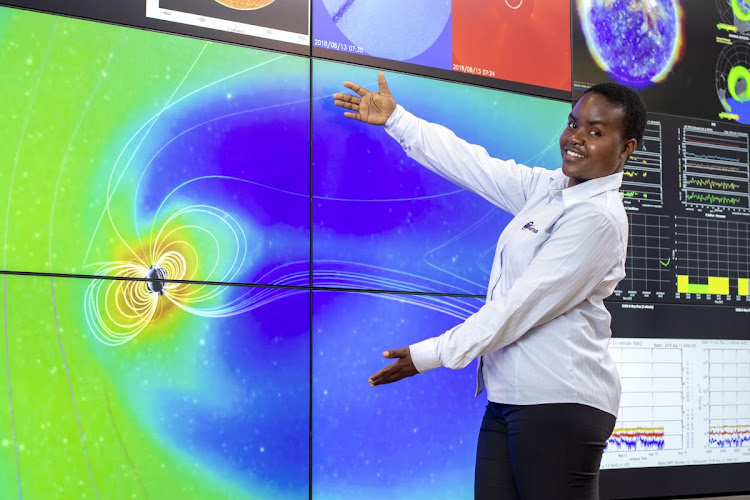 SANSA is a government agency that reports to the Department of Science and Technology, and is part of the worldwide network of space weather centres and magnetic observatories. It plays an important part in monitoring the near-Earth space environment.

In simple terms, the agency works mainly with satellites.

“I developed a love for physics while in my first year; that is when I got to better understand the physical science concepts I was taught in high school,” she said.

She was fortunate enough to get a National Student Financial Aid Scheme loan that paid for her undergraduate studies, before being granted a SANSA bursary.

She joined SANSA in 2016 as a space science researcher.

Although her job is a bit multi-faceted and she has worked on a number of research projects, Dr Nndanganeni is currently researching the impact that space weather has on aviation.

Space weather refers to the changing conditions on the sun and in space that can influence the performance of the technology we use on Earth.

“We look at important areas in aviation, such as how space weather impacts communication in the aviation industry, navigation of aircraft and the impact of radiation in space,” she explained.

Dr Nndanganeni is based at the regional warning centre in Hermanus in the Western Cape.

She encourages young people to consider a career in space science because there are many opportunities, thanks to the Fourth Industrial Revolution.

“Over and above the careers that are already available at SANSA, there will always be a need to innovate new technology and develop new ways of doing things. That means we will always need professionals who can make this possible,” she said.

Dr Nndanganeni advised young people interested in a career in space research to take up mathematics and physical science as main subjects in high school.

Design and fashion has always been in Pamela Ifeneme-Nwosa's life it was no surprise that she quickly pursued studies in fashion design and marketing.
SebenzaLIVE
1 year ago

From Mitchell’s Plein to Paris: here’s how this dancer is planning on opening the industry

From the vibrant streets of Mitchells Plain in Cape Town to the glamorous streets of Paris in France.
SebenzaLIVE
1 year ago
Next Article