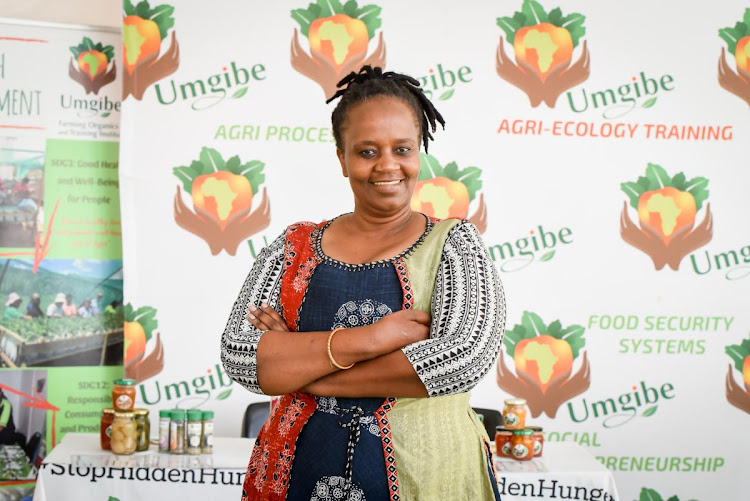 Nonhlanhla Joye fought illness, poverty and hunger to start Umgibe, a company which now has a positive impact on thousands of people.
Image: Supplied.

Nonhlanhla Joye has been through some huge struggles in her life, including illness, poverty and hunger.

But this remarkable woman fought through it all to make a success of herself and impact positively on the lives of hundreds of people in her community, through an innovative vegetable-growing initiative called Umgibe.

Joye (54) was born in the  village of Umphise in KwaZulu-Natal. Her parents were subsistence farmers, providing fruit and vegetables for the family.

“I never knew that you could buy vegetables when I was growing up,” said Joye.

In 2014, Joye’s life changed forever when she was diagnosed with cancer. She was left powerless and could not provide for her two children and three grandchildren.

“I realised that I needed to grow vegetables in my backyard but my neighbours’ chickens ate everything in sight. Needless to say, I was devastated.”

This prompted Joye to start a new growing system which used discarded plastic bags to grow vegetables in a vertical system.

“Before long, I had vegetables to eat and there was also enough to sell to the neighbours. I gathered a few women and we each grew vegetables and started selling them.”

In July 2015, Joye officially registered the company under the name Umgibe, and her patented growing system began to spread.

“We now have 95 co-operatives growing vegetables, giving 897 households vegetables to eat. Schools have also become involved in growing their own vegetables.”

To her, however, Umgibe is much more than a business.

“It is a way to empower people and do away with being dependent on others. Today, we have trained 300 agri-preneurs who can grow food to not only feed themselves, but also to gain an income and improve their livelihoods. We also have 200 school children who we call seedpreneurs, from 10 different schools around Durban.”

Joye’s work has been recognised both nationally and internationally. Since 2015, she has won 15 prestigious awards related to entrepreneurship, business development, societal impact and environmental friendliness. But this courageous woman has her sights set on an even bigger goal – making a difference to the lives of thousands more people.

“My vision is to grow Umgibe to be the biggest experiential training centre in Africa. A place where Africans can learn to grow their own food and learn about the whole value chain from seed to processed. I dream of an Africa that is not only food secure but an Africa that has communities that are self-sustainable,” said Joye.

Ordinary women can be extraordinary

Joye always had a passion for supporting worthy causes in her community. When she was young, she noticed that women in particular faced difficult challenges.

“I started an organisation that dealt mainly with rape, which was prevalent in my community. But as we progressed, we realised it went way beyond this. I am talking about poverty, unemployment and HIV.”

She approached several organisations to help with providing food parcels. All went well, but then she noticed that people were starting to expect too much and weren’t trying to help themselves.

“People started demanding that we give them food parcels and it was clear that they felt entitled.”

Joye decided to change the organisation – instead of just receiving food parcels, she wanted the beneficiaries to become actively involved in the process. She and a few other women pooled their money to buy seeds and other equipment and they started to grow and sell vegetables. The left-over vegetables were donated to child-headed homes and the elderly.

Women must choose to fight through tough times to find something beautiful, she believes.

“I want to say to all women who are going through tough times, be it hunger, health or emotional issues, that there is value in the valley. My valley was illness, poverty and hunger but I made a choice to fight back to regain my health and dignity. It starts with you finding the purpose for your existence and my purpose in life is to stop hunger.”

Here's how to have a career as a water care technologist

Water care technologists are responsible for the purification of water by removing harmful household and industrial substances from the water.
SebenzaLIVE
2 years ago

Farmer and businesswoman Tebogo Ditsebe from Jacobsdal in the Free State always had a passion for farming.
SebenzaLIVE
2 years ago
Next Article