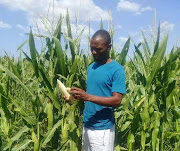 The child of farm workers, Gil Wilson (35) has gone on to become a maize farmer with workers of his own.

His farm, in the agricultural town of Jan Kempdorp in the Northern Cape, is set to increase its maize production from 188 tons last year to 266 tons this year, all thanks to support he received from the Comprehensive Agricultural Support Programme (CASP) and other government initiatives.

Young farmer Gil Wilson is creating jobs in his community.

The CASP aims to facilitate agricultural development by targeting beneficiaries of land reform, restitution and redistribution, and other black producers who have acquired land through private means.

In 2016, Wilson received a farm through a lease from the Department of Rural Development and Land Reform, after going through a lengthy application process with the national department. The lease is renewable every six months.

He was then given a leg-up by the Northern Cape Department of Agriculture, Land Reform and Rural Development, which donated 38 bags of maize seed and 190 bags of wheat seed, each weighing 25 kilograms. More recently, a tractor donated through the CASP and 300 50-kilogram bags of fertiliser have given him another boost.

Wilson has a water-rights contract with the Department of Water and Sanitation.

The former construction worker said the 38-hectare farm has helped him create jobs in the community. He has hired five people, with two of them being permanent. The farmer said he wants to grow from being a small-scale farmer into a commercial farmer so he can create more jobs for young people.

Currently, his maize is sold to agricultural company Senwes.

He said young people should enter the agricultural sector so that they can be drivers of the economy but cautions that they should be prepared to work hard.

“Commit yourself. Be passionate. Farming is not simple. It’s very tough – you must be a hard worker and really know your story.”