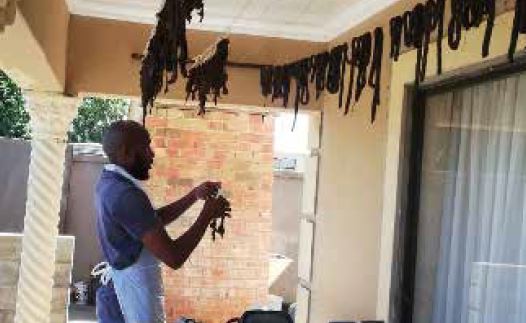 The meat his dad gave him to make biltong as a reward for his help as a youngster inspired a Free State entrepreneur into starting his own business.

What was once a hobby has turned into a livelihood for 29-year-old Serasengoe Moodie.

Making biltong from the meat of animals hunted by his father was once a fun sideline for the young entrepreneur but today he has turned this former interest into a profitable agro-processing business called Amity Development Solutions.

Based in Thaba Nchu near Bloemfontein in the Free State. The company has its own cattle, and produces biltong and other meat products.

“My father used to go hunting and upon return I would assist him with handling the meat that was from his hunting trip. He would reward me with a few kilograms of meat and tell me to make biltong for myself. I sold some of it to my friends and made a few rands for myself,” he explained.

As time went by, Moodie decided to turn his hobby into a business.

“When the business started, I was just selling biltong, but it is starting to grow and I now supply clients with other meat products, including wors and mince. I also have my own livestock,” he explained.

He received a business grant of R100 000 from the Department of Economic, Small Business Development, Tourism and Environmental Affairs in 2018 and bought butchery equipment.

He also won a R10 000 business voucher from the National Youth Development Agency in the same year and used it to buy a meat dryer.

The support from government has helped to improve his business and he is now able to meet clients’ demands quicker than before.

Although the business is still in its infancy, Moodie has managed to employ two people on a permanent basis and also has a few temporary workers for busy periods.

His home kitchen doubles as a butchery and meat-drying business for now but he hopes for his own business space in the future.

Here's how paint technologists analysis, tests and do research on different products

The work of paint technologists can be divided into three categories.
SebenzaLIVE
2 years ago

When it comes to a career in law, many get excited for the life in the lavish lane similar to a TV series, Suits.
SebenzaLIVE
2 years ago
Next Article